Scalia’s timely departure implies that the landmark union case “Friedrichs vs. California Teachers Association” will be a 4-4 stalemate, meaning the pro-labor status quo prevails. As they cheer the last minute pardon unions shouldn’t forget they’re still on death row. The solace is temporary.

Unions can’t assume the next Justice won’t be another Scalia. The worst should be prepared for; being unprepared last time nearly cost labor its head. The same corporate groups who backed Friedrichs will try again, soon, with a fresh case, new plaintiff, and possibly facing an equally anti-union Supreme Court.

Obama’s nominee is unlikely to be pro-labor. The old assumption that Democratic presidents appoint pro-labor judges may now be false. Times have changed. Pundits are speculating that Obama will nominate a Judge the Republicans will support. Progressive legal expert Scott Horton spoke on Democracy Now:

Nowadays the Republican Party is viciously anti-union. And while Republicans hate several demographics, unions have become — like African Americans in general — a group that Democrats take for granted and attack when convenient.

Republicans would be especially excited about an anti-union peace offering from Obama. Such a nominee could represent a “grand bargain” to avoid a constitutional crisis, where Obama is allowed to successfully end his presidency and the right wing maintains its dominant position on the Supreme Court.

The Friedrichs case provokes a unique zeal from the right wing because of its vast economic consequences. If unions lose Friedrichs, the labor market would be shifted sharply in favor of corporations. The “natural” pro-corporate laws of the market would accelerate, putting workers at a steeper disadvantage.

Wages in the public sector would quickly drop as union density shrinks, creating knock off effects in broader areas of the labor market. Employers would exploit this new leverage at the bargaining table, slashing benefits and lowering wages. An anti-union Friedrichs decision could set a precedent for a national law affecting all unions, public and private sector alike.

Would Obama actually please Republicans over the bones of unions? Yes, if his record is any indication. He began his presidency with a super majority in Congress, and instead of the bold pro-labor initiatives he promised, he slammed on the brakes, reaching out to racist Republicans who’d rather torch then touch him.  Obama is too smart not to realize he was throwing away his mandate: the big banks that financed his campaign got their money’s worth.

When it comes to unions, Obama is a moderate Republican, just like the pro-corporate “Blue Dog” Democrats that run the Democratic Party. Obama’s flagship national educational program, “Race to the Top,” was even more anti-union than George Bush Jr.’s “No Child Left Behind.” The two-party system now bonds over anti-unionism.

It’s no coincidence that Obama was completely absent from the two biggest union actions in decades: The 2011 Wisconsin Uprising and the 2012 Chicago Teachers strike. The president’s absence spoke much louder than the few hesitant words he spoke on the subjects.

While every Republican in Illinois was mobilizing to attack the Chicago teachers, Obama’s former Chief of Staff was leading the anti-union charge. The battle lines were adjusted to reflect the new political reality: Democrats and Republicans versus the unions.

Anti-unionism is now a bipartisan issue. As the big banks boomed, union power shrunk, luring the Democrats further to the right; their stance on labor changed from ambivalence to hatred. Now they are staunchly in the Republican camp on the front lines in the class struggle against unions.

This new consensus is reflected in many of Obama’s “top contenders” for Supreme Court nominees. Judge Sri Srinivasan, who earned his current position on the Court of Appeals by a 97-0 vote of the current Congress, is someone whose name has been broadly discussed. The lack of controversy was due, in part, to his years as a corporate attorney. Corporate attorneys are habitually anti-union.

Another top contender is 9th Circuit Judge Paul Watford, yet another corporate attorney who hasn’t dirtied his hands with anything progressive.

The two-party system is so anti-union that it’s possible Scalia’s death won’t even matter; a current judge could easily flip on Friedrichs against unions. Scalia’s death doesn’t freeze the anti-union trajectory of the establishment; a lot of momentum has already been built up.

The establishment is unlikely to sit on their hands, and unions cannot afford to either. Hoping that a pro-union Justice is appointed is not a political strategy, but Russian Roulette; a tactic that can work for a while but always ends the same.

Historically unions have only won at the Supreme Court when expressing their power. The establishment only shows respect when you demand and fight for it.

The “progressive” Supreme Court under Warren Burger that favored unions was a response to the mass movements and active labor movement of the 60’s and 70’s. Burger himself was appointed by Nixon, though moved to the left by the political ground shifting beneath his feet.

Labor’s biggest Supreme Court victories came during the time of Franklin Delano Roosevelt under a Conservative Supreme Court that was forced to respond to a union-led mass movement. Without mass action the labor movement shrivels.

After the nationwide actions of organized labor in the 1970’s, the establishment chose to appease this power. But now they’ve decided to test it, through Friedrichs. Future tests are inevitable.

A prior test provoked the Wisconsin Uprising, showing the potential power of all unions. This is why Friedrichs is actually a gamble for the ruling class; they’re hoping that a national version of Wisconsin doesn’t happen. Unions must dash these hopes through organizing and other actions. A quiet labor movement will go quietly to the gallows; and Scalia was preparing the rope when he died.

The death of Scalia should empower unions to mobilize, not rest on their already-withered laurels. Without constant pressure the establishment will feel comfortable continuing in an anti-union direction. Power must be met with power.

Just like the 15now campaign has been mobilizing at the Democratic debates to amplify their issue, so should unions borrow the tactic to promote a Friedrichs victory. The Democratic nominee must feel the pressure to publicly advocate a pro-union decision.

Forcing this issue into the debates would send a very strong message. And organizing mass demonstrations around Friedrichs — as several labor bodies have called for — will send an even louder message. Unions must re-learn how to express their power. They’ve forgotten, but doing is the best way to learn. 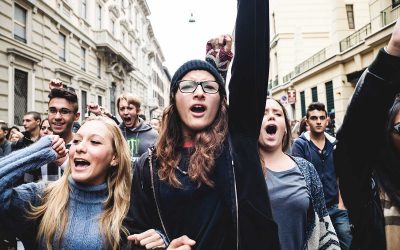