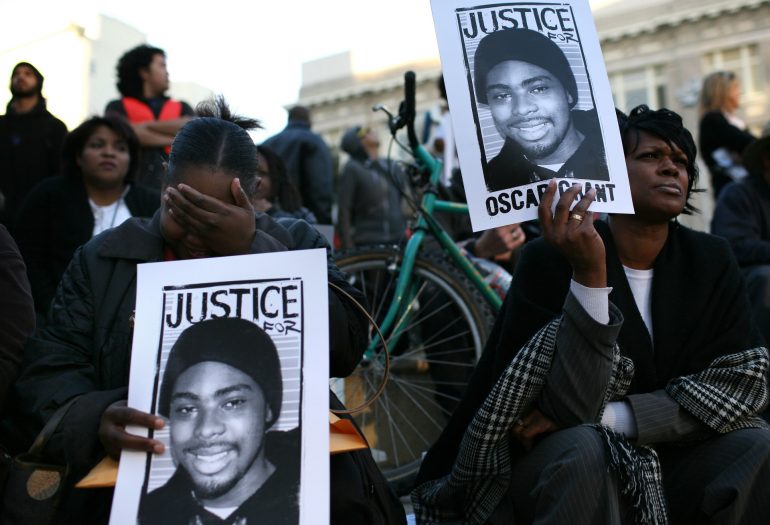 OAKLAND, CA - JANUARY 14: Protestors carry signs with a picture of slain 22-year-old Oscar Grant III during a demonstration at Oakland City Hall January 14, 2009 in Oakland, California. Twelve days after the fatal shooting of Oscar Grant III, former Bay Area Rapid Transit (BART) police officer Johannes Mehserle was arrested and charged with murder for shooting Grant in the back as he lay face down on the ground following an altercation on a BART train. (Photo by Justin Sullivan/Getty Images)

Two years ago, with the election and inauguration of the first African American President, the corporate media in the U.S. was giddy with excitement that America had entered a post-racial era. The hollowness of that claim was revealed today with the sentencing of white transit policeman Johannes Mehserle for the killing of African American resident of Hayward, California, Oscar Grant. Mehserle was found not guilty of second-degree murder, which carries a sentence of 15 years to life and means that the defendant is aware that his or her action is dangerous to human life but does not act with premeditation. Instead he was found guilty of a far lesser charge, involuntary manslaughter, meaning that death resulted from negligence. It carries a sentence of 2 to 4 years.

This is an unconscionable verdict that flies in the face of justice. But that is typical for capitalist “justice” in Black America. Police may kill African Americans with virtual impunity — what is remarkable is that Mehserle was convicted of the lesser charge at all.

The jury, which did not have one African American on it, met for less than one full day — six hours  —  after an alternate juror had to be seated. All Black potential jurors were excluded, but white jurors who had contact with police in the past were permitted. Where is the blind justice promised?

Anyone familiar with handguns understands that the verdict is preposterous. While Mehserle might have been issued the taser relatively recently, nevertheless he had the gun from the beginning of his service with BART so he was certainly familiar with it. The gun has a unique safety that must be physically disabled. Moreover, the gun’s grip and trigger both have an unmistakable feel and weighs approximately 4 times the taser. The gun is handled by officers everyday, if simply at the beginning and end of a shift. It is beyond belief that the gun could be mistaken for a taser with an entirely different feeling.

This verdict underscores the institutional failure of the criminal justice system to prosecute police officers who attack or kill African Americans specifically and non-whites in general. The police are protected by the entrenched order of justice that serves the interest of a tiny minority: the U.S. capitalist class. The logic of capitalist rule seems to reveal that social inequity for African Americans is a fundamental fact of social relations in the United States. The system protects the police, the frontline enforcers of social and class relations. The system will back up its agents, even a mere transit cop, over the life of any African American.

Liberals of all varieties are urging “calm,” as if injustice after injustice can be endured without social protest. This system breeds violence  — how much can people endure without rage, without striking back? Revolutionaries understand this system requires a divide and conquer approach and yet humanity can only endure so much. When the oppressed of this country, faced with chronic high unemployment, layoffs, school closures and mortgage defaults  — something is going to give.

We revolutionaries say this: It is right to rebel. What we need is to organize and mobilize to overturn this rotten system of racist capitalism. We have to build our own political united front, based on the interests of the majority, the multiracial working class. This will be a long struggle, but we have been oppressed for a long time. We have nothing to lose but the chains that imprison us and a world to win.

Beyond Vietnam: A Time to Break the Silence