Can the Establishment Fix Its Bernie Sanders Problem? 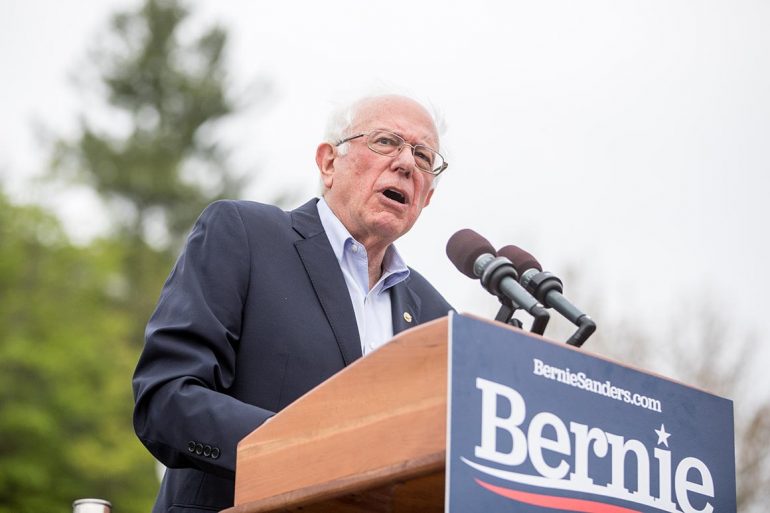 The Democrats’ fight against Bernie is appearing futile. Like a python choking on an elephant, they’ve miscalculated. The Party elites underestimated their opponent, and with each new attack the snake swallows an extra inch, harming only itself. Establishment figureheads are taking turns ruining their reputation as they attempt to ruin Bernie’s.

The U.S. ruling class as a whole revealed the depth of its crisis in this election: not since the Vietnam War have both wings of the establishment thoroughly discredited themselves. The Republican wing combusted quickly while the Democrats have chosen a slower, more torturous form of self-harm.

The problem with both parties is their inability to serve the super rich while successfully appealing to voters. As inequality widens, democracy suffers. Focusing on the “billionaire class” has catapulted Bernie’s campaign, but the presidency is not an institution that just anybody is allowed to capture.

How will this all play out? Nobody knows. Polls swing wildly in times of flux, making predictions risky. Here are two questions whose answers will guide the future of the election:

1) Can Bernie win the Democratic nomination?

2) If Bernie wins, what next? Will the establishment try to make a deal with him? And will Bernie take it? Or will he remain true to his rhetoric and be a candidate of the 99%?

Nobody except his cheerleaders believed Bernie could actually win, until recently. His momentum combined with Hillary’s crash has forced many to rethink.

An excellent article by Arun Gupta lays bare the machinery of the Party that could be used to decapitate Bernie’s campaign. Yes, the Democratic Party machine could destroy Bernie’s campaign, but it could come at a cost they might not be willing to pay. Most of the Party’s weapons are blunt instruments that leave too much evidence. And millions of people are watching closely.

The first major Party attack misfired badly when the Democrats tried to sabotage Bernie by restricting access to voter data. Hundreds of thousands of people expressed outrage on social media and by signing petitions.

The blowback stunned the Party, which quickly backtracked. They learned a powerful lesson: By destroying Bernie, they could destroy the Party, completely discrediting themselves in front of millions of people.

They didn’t realize how fast the political ground was shifting beneath their feet. Nobody did, and unless an anti-Bernie cryptonite is found soon, the crisis will deepen. Their own electoral game is rigged, yet out of their control.

The trump card of the Party elites is their control of “superdelegates.” But overplaying your best cards is risky too. Imagine Sanders winning the popular vote by wide margins in state after state, only to have the Party machine give the delegates to Clinton. Acting this undemocratically could trigger a deep crisis and destroy the veneer of democracy.

For now the Democrats have opted for a backup plan. It isn’t working. They launched a coordinated pro-Hillary bandwagon campaign, foolishly thinking that Bernie’s populist message could be drowned by a flood of “respected individuals” offering glowing endorsements of Clinton or making cheap attacks against Bernie.

Hillary’s bloated list of endorsers is a “who’s who” among Party elites; nearly every Democratic senator and House representative has endorsed Hillary, while an array of intellectuals have emitted a stream of drivel from their pens and mouths. But their pro-Hillary hack pieces have only invited rage and insults. Nobody likes an arrogant salesman with a shoddy product.

Gloria Steinem, Paul Krugman, Bernie Frank, Madeleine Albright, and a host of others have proven themselves cheap hitmen for the establishment. But their aim is off. The self-inflicted wounds are exposing the hollow intellectualism of the Party elites. Trying to sound smart is tough while making dumb arguments.

Esteemed liberal economist Paul Krugman proved to everyone how clueless he was about political change in his anti-Bernie article “How Change Happens.” His readers skillfully torched him in the comments section.

Famous feminist Gloria Steinem had to apologize for her sexist comment that young women like Bernie because “boys” do.

And Madeline Albright would apologize too, had she any dignity. In her pro-Hillary rant she said there was a “special place in hell” for women who would vote Bernie. But if hell does exist, Albright certainly has her own very special place reserved, for having argued that it was “worth it” that 500,0000 Iraqi children died as a consequence of the U.S. Clinton-era sanctions levied against Iraq.

These “influential” people have lost their authority, which hinged on a political equilibrium that has drastically changed. They can no longer stuff their beliefs down others’ throats. There is a resounding clash of realities which the elites are smashing their heads against, one after another. Young people care nothing about what these so-called experts say. Nor should they.

The mass discrediting of “respected” individuals represents another side of the establishment’s crisis. The question is being posed: who really has the ear of the people? It turns out that very few elites can exert much influence.

They are too alienated. Historic inequality has shrunken the establishment to 1% of the population. Meanwhile, the ranks of the “middle class” have been reduced, most of those still in the “middle class” are now struggling to get by, and the poor are getting poorer.  By breaching this alienation Bernie has exposed the whole rotten system that Hillary hopes to preserve.

The many organizations endorsing Hillary faced similar denunciations from their adherents. Groups like Planned Parenthood, national labor unions, The New York Times, and the League of Conservation Voters proved how unrepresentative they were of their followers and members.

This dynamic can’t go on much longer. It’s too dangerous; it creates unpredictable political chaos. If Bernie survives the multi-state primary “Super Tuesday” on March 1st, the Party establishment may give up and approach him to make a deal. If they can’t beat Bernie they’ll join him; or more accurately, they’ll officially ask Bernie to join them.

What might an offer look like? Broadly speaking, they would ask Bernie to focus his campaign against the Republicans in certain ways, and if he were to become president they’d ask that he’d adhere to a small list of policy considerations.

But would Bernie take the bait as Obama did? Yes, most likely he would. As argued in a previous article, Bernie supports the unifying priority of the establishment: war and imperialism abroad, which requires less domestic spending at home.

His allegiance to the juggernaut of the U.S. military-industrial complex isn’t a blind spot of his politics; he’s trying to play ball. You’ll notice that Bernie isn’t advocating the slashing of the military budget during the debates, even though the vast majority of people would enthusiastically support such an idea, especially if it meant funding the programs Bernie is promoting.

Another indication that Bernie would be willing to join hands with the 1% is his stated willingness to support Hillary if he loses. If he is so anti-establishment why would he campaign for one of its most notorious figures? As author Diana Johnstone shows in her new book “Queen of Chaos,” Hillary is a quintessential member of the ruling class, representing everything that Bernie claims to be against. His principles are mushier than they appear on TV.

Sanders would surely justify his pro-Hillary campaigning as a “fighting against the right wing,” a common theme of Sanders’ politics over the years. He’s attacks have been limited to Republicans, which is why Obama’s establishment presidency provoked little criticism from Sanders, and never a strong denunciation.

Sanders has already made overtures to the Democratic establishment during his campaign. At a Party conference he pleaded for support, arguing that he is the candidate the Party should unite around since his popularity would increase voter turnout.

There is plenty of other evidence that Bernie could make peace with a Democratic Party agenda, based on the years that he caucused with Democrats in the Senate. It’s true the establishment doesn’t identify with Bernie. They don’t trust him. But Bernie identifies with them.

Many have compared Bernie Sanders with the UK Labor Party leader, Jeremy Corbyn. But several articles have made the case, correctly, that Corbyn’s politics are far to the left of Bernie’s, who could taper his rhetoric just a bit to fit into the mold of the Democratic Party elites. The Democrats wouldn’t be able to make a deal with a Jeremy Corbyn, who’s been a consistent anti-war politician for decades, but they could possibly do business with Bernie, were they desperate enough.

The emperor can easily change clothes, and feels comfortable in different skin colors or genders. But capitalism will shed its democratic clothing if needed. If Bernie posed a real threat to core economic interests, the establishment would go to greater undemocratic lengths to prevent him from taking office.