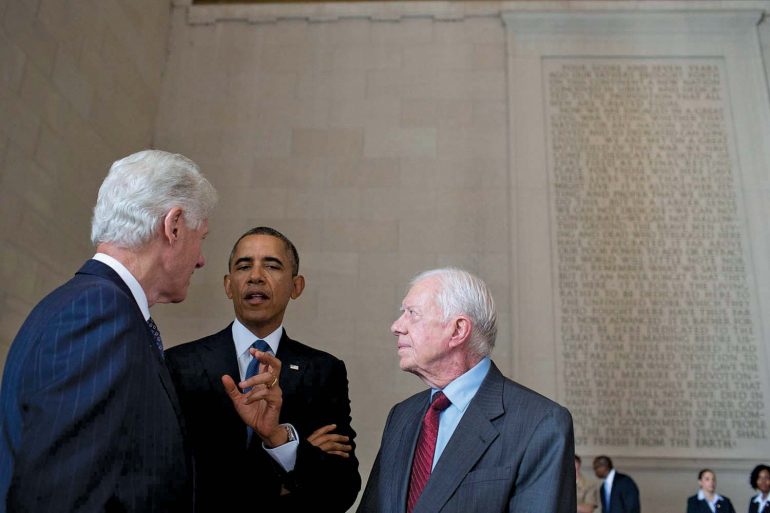 For a president that is executing Bush’s “war on terror” against Al-Qaeda and “its affiliates,” it seems odd that President Obama has targeted the secular Syrian government for “regime change.”

Equally odd is that Obama’s strongest military ally on the ground in Syria — the best equipped and effective fighting force against the Syrian Government — is Jabhat al-Nusra, a group that has affiliated itself with al-Qaeda, and aims to turn Syria into an extremist Islamic state that enforces a fundamentalist version of Sharia law.

It’s difficult to know exactly how al-Nursa received its guns, but one can make an educated guess. For example, The New York Times explained in detail how the CIA has been in a massive arms trafficking operation that has already funneled thousands of tons of guns from Saudi Arabia and Qatar to Syria:

Where are the guns winding up in this massive arms trafficking operation? An important question to ask is: which rebels in Syria have guns and which ones don’t.

The [secular] Free Syrian Army’s shortage of weapons and other resources compared with [jihadist] Jabhat al-Nusra is a recurrent theme… ‘If you join al-Nusra, there is always a gun for you but many of the FSA brigades can’t even provide bullets for their fighters,’…3,000 FSA [Free Syrian Army] men have joined al-Nusra in the last few months, mainly because of a lack of weapons and ammunition…Al-Nusra fighters rarely withdraw for shortage of ammunition…

For example, when the Economist magazine was outlining the most important fighting groups in Syria, “Who’s Who in the Syrian Battlefield,” they noted with regret that the only important non-Islamist group was in the Kurdish areas, which is virtually an autonomous zone. As far as the secular U.S.-backed fighting group, The Supreme Military Command, the Economist conceded it “has little control on the ground.” Keep in mind that the Economist is very much in favor of a U.S.-NATO military intervention in Syria.

The New York Times also confirmed the complete dominance of extremists on the rebel side:

Nowhere in rebel-controlled Syria is there a secular fighting force to speak of.

Thus, the minority of secular rebel fighters are not leading the civil war and will not be in power if Assad falls. Instead, honest Syrian revolutionaries will instantly fall victim to the extremists, who will immediately proceed to a mopping-up mission of their former allies.

It’s now clear that Obama’s foreign policy in Syria is actively encouraging terrorism. Many rebel-controlled areas in Syria are now new safe havens for terrorists, and there have been hundreds of terrorist bombing attacks against the Syrian government, many of which have targeted civilian areas.

While the U.S. is pouring arms into the jihadist-controlled areas, they have also downplayed the atrocities committed by these rebels, which are well documented on Youtube and include a multitude of war crimes that include beheadings, group execution of prisoners, ethnic cleansing, and the recent episode where a famous rebel commander was videotaped mutilating a dead Syrian solider and eating his heart.

By minimizing this barbarism the Obama administration ensures that it will continue, since the extremists are empowered by U.S. support and are shielded in the U.S. media and protected from international political pressures.

One question the U.S. media never thinks of asking is: Where did all these Islamic extremists come from and why? The Sunni Islamic opposition inside Syria has long been religiously moderate, implying that many of the extremists are foreigners.

The ideological source of this extremism came from Saudi Arabian religious figures and their allies, who use Islam as a political tool to target nations “unfriendly” to Saudi Arabia and the United States. The most glaring example of this in regard to Syria was the Fatwa (official interpretation/statement) issued by 107 Islamic scholars that denounced the Syrian government and encouraged Muslims to fight against it. The statement essentially encouraged jihad, though the word wasn’t mentioned explicitly.

It is a duty for all Muslims to support the revolutionaries in Syria [against the government] “so that they can successfully complete their revolution and attain their rights and their freedom.

The hypocrisy of such a statement is almost too glaring: the many Saudi figures who signed the document that want “freedom” in Syria are not demanding freedom in Saudi Arabia, by far the country with the least amount of freedoms in the world.

With Saudi Arabia and Qatar providing guns to the Syrian rebels — with help from the CIA — the Saudi religious figures attached to the regime give religious/political support by misleading devout Muslims to flock to Syria to attack a country of Muslims, thus creating the giant sectarian divisions we now see throughout the Islamic world.

The vast majority of this Islamic sectarian warfare is exported by Saudi Arabia, which funds radical Islamic schools all over the Middle East that attract the downtrodden of these countries by providing basic social services that the host country is too poor — or unwilling — to provide. There is an informative chapter on this dynamic in Vijay Prashad’s excellent book, A People’s History of the Third World.

Now the debate among U.S.-NATO countries is whether to give more sophisticated weaponry to the extremist-dominated rebels in Syria. The Obama Administration is pressuring the European Union to drop its arms embargo on Syria so that a new torrent of weapons can flood the country (apparently the CIA operations haven’t yet completely drenched Syria with guns).

In response to the “drop the embargo” discussion, Oxfam intelligently responded by saying:

Sending arms to the Syrian opposition won’t create a level playing field. Instead, it risks further fueling an arms free-for-all where the victims are the civilians of Syria. Our experience from other conflict zones tells us that this crisis will only drag on for far longer if more and more arms are poured into the country.

One EU diplomat gave a scathing rebuke to the Obama Administration’s claim that it could ensure that new weapons wouldn’t wind up in “the wrong hands” in Syria:

It would be the first conflict where we pretend we could create peace by delivering arms,” the diplomat said. “If you pretend to know where the weapons will end up, then it would be the first war in history where this is possible. We have seen it in Bosnia, Afghanistan and Iraq. Weapons don’t disappear; they pop up where they are needed.

In Syria the weapons are needed by those doing the brunt of the fighting. Again, the al-Nursa jihad group is widely acknowledged to be the most effective fighting force against the Syrian government–the guns thus flow to them.

Obama has taken the saying, “the enemy of my enemy is my friend,” to irrational heights, and in so doing is helping to produce a new generation of Islamic extremists that will help fuel the U.S.-led never-ending “war on terror.” The real intention of the War on Terror is not to stop terrorists, but to target nation states that are opposed to U.S. foreign policy: Iraq and Libya — like Syria — were both secular countries at the time of their being invaded; Afghanistan was invaded even though the vast majority of those involved in the 9-11 attacks were from Saudi Arabia. There was no terrorist problem in Iraq before the U.S. invaded, just like there was no terrorist problem in Syria before the U.S.-backed rebels came onto the scene, other than the typical terrorism inflicted by these regimes on their own people. But the U.S. government is hardly innocent of inflicting terrorism on its own citizens either.

It’s blatantly obvious to most Americans that Syria and Iran are at the top of Obama’s war list, a much higher priority than any terrorist group. This is why Obama is tolerating the terrorist groups inside Syira; they are being used as tools against his real target, Syria and then Iran.

The Syrian people must be left to themselves to decide their future. The United States is utterly incapable of “helping” countries by using military means, as the fractured nations of Afghanistan, Iraq, and Libya painfully prove. The global anti-war movement must demand Hands Off Syria!