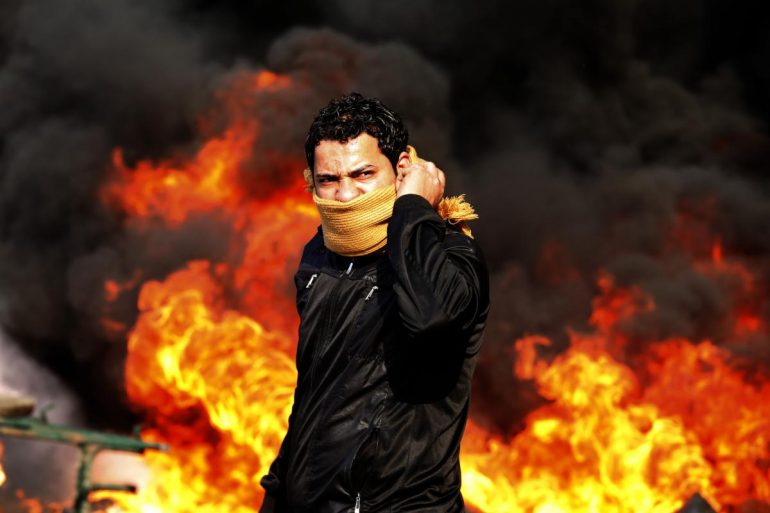 In times of crisis people strive for easy answers to complex situations. In Egypt this has resulted in absurdly digestible sound bites, where one side is labeled “good”(the Muslim Brotherhood), the other “bad” (the army), and the revolution as a whole is condemned as an atrocity. But the situation in Egypt is especially contradictory, and untying the social-political knots of the revolution requires avoiding pre-packaged catchphrases.

Contrary to the claims of many, reports of the revolution’s death are greatly exaggerated. Those who predict that Egypt will inevitably enter a long period of military dictatorship forget that the Egyptian revolution destroyed such a dictatorship in 2011, and helped topple Morsi’s authoritarian government in July. The people in Egypt have not been cowed into submission, they are still in the streets, unafraid, consciously aware of their power. The Egyptian military is very aware of this fact, as their actions testify.

Although it’s a tragedy that innocent people have been killed, it’s also true that the Muslim Brotherhood represents not the revolution, but its adversary. Especially confusing is that another opponent of the revolution — the military generals — are leading the attack against the Brotherhood, which raises the question: why would one enemy of the revolution be attacking another?

The current, bizarre-seeming situation in Egypt is actually common in the history of revolutions, having started in the modern era with Napoleon Bonaparte, who, during the French Revolution, consolidated his power by aligning with certain social classes against rival sections, and switching allegiances when necessary to offset the power of his former allies, until all political rivals were weakened, allowing him and his army to act as arbitrator and ruler.

This now common feature of revolutions is often referred to as “Bonapartism” in honor of its founder and is a reflection of society in revolutionary upheaval, where different social classes are powerfully asserting themselves, though unable to out-power their adversaries, allowing the military to act as the Bonapartist “arbitrator.”

Bonapartism is also a sign of the political weakness of the military, which is not able to rule without aligning with certain segments of the population (this is why the Egyptian generals recently asked for mobilizations to signal “permission” to put down the Brotherhood’s civil disobedience actions, essentially using Egypt’s political left against the political right).

Bonapartism has been practiced by military dictatorships since Napoleon. In fact, Egypt’s popular military President Gamal Abdul Nasser — who instituted many progressive measures in Egypt — was himself a classic Bonapartist, though one who uncharacteristically leaned left.

For example, after surviving an assassination attempt from the Muslim Brotherhood, Nasser used the military to destroy the Brotherhood, while enjoying support from the political left in Egypt due to his progressive policies. After dealing with the Brotherhood, Nasser consolidated his power against the growing revolutionary left, by attacking both the communist party and trade unions. This political balancing act between political left and right is the hallmark of Bonapartism.

Nasser’s successor, Sadat, also used a Bonapartist strategy when he invited the Muslim Brotherhood back into Egypt to use as a right wing political battering ram against the Egyptian left. Sadat needed the Brotherhood as a political prop to help him reverse the progressive policies implemented under Nasser.

Mubarak, too, used the Brotherhood in this fashion, for the same reasons as Sadat. It’s true that both Mubarak and Sadat used aggressive measures against the Brotherhood at times, but they both allowed the group greater freedom for political organization than any other group, since the Brotherhood was a politically perfect compliment to the president’s right-wing, neo-liberal policies.

This pro-Brotherhood favoritism led to the situation where, after the fall of Mubarak, the Brotherhood was virtually the only organized political force in Egypt. After being dragged into the revolution kicking and screaming by their youth wing, the Brotherhood then opportunistically took power, while sharing none of the goals or vision of the revolutionaries.

One common way that commentators have been confusing the situation in Egypt is by portraying the Muslim Brotherhood as Ghandian revolutionaries striving to restore democracy. But in the same breath these analysts say, correctly, ”God forbid” if the Brotherhood is allowed to implement their vision of a fundamentalist Islamic State in Egypt, since doing so would automatically reduce the liberties of women, non-fundamentalist Muslims, and religious minorities.

Yet another common mistake in assessing Egypt is to portray the conflict as secularists against Muslims. The Muslim Brotherhood does not have a monopoly over Islam in Egypt. Out of the millions of people who demanded the ouster of Morsi on June 30th, the vast majority of them were Muslims of the Sunni variety, just like the Muslim Brotherhood. But the Brotherhood’s fundamentalist version of Sunni Islam remains a minority opinion among Egypt’s Sunni majority.

A further flaw in analyzing current events in Egypt lies in forgetting how the situation developed, which requires that we delve into the not-too-distant past of June 30th, when millions of Egyptians demanded the departure of then-President Morsi. These massive demonstrations were obviously at least as large as the ones that toppled Mubarak, yet the Muslim Brotherhood failed to get the message, and have attempted to use militant civil disobedience in order to reinstate the unquestionably unpopular Morsi.

And although there are many who simply dismiss the June 30th demonstration of millions as a “conspiracy,” it’s impossible to force people to attend demonstrations with one united demand, “Morsi must go,” if they don’t want to be there. Many “pro-conspiracy” analysts simply seem not to understand the profound political significance of demonstrations of that size, as if they’re somehow common and not symptoms of a powerful revolution.

It’s true that the Egyptian generals — not to mention plotting foreign countries — are trying to implement their own agenda throughout the crisis, which always entails some conspiratorial maneuvering, but the demands of June 30th made it very clear where Egyptians stand on the issue: they spoke with their own voice.

Although the majority of Egyptians are now anti-Muslim Brotherhood, the military’s recent actions create new problems for Egypt’s revolutionaries. The power of the Brotherhood will be shattered, but the power of the military will be enhanced. To prevent the generals from abusing their power against the Egyptian working class, revolutionaries need to quickly plan a way to protect themselves while furthering the demands of the revolution.

Because the Egyptian left remains insufficiently organized, they must utilize the political strategy of the United Front, which unites broad sections of the population behind a limited number of popular demands. By doing this, the military generals will be powerless in the face of a united mass movement that is putting forth a positive program, as opposed to the current dynamic that is united around what Egyptians reject. A united front mass movement will win the hearts and minds of the rank-and-file Egyptian soldier, while also preventing the Brotherhood’s fundamentalism from gaining a fresh batch of recruits.

In Egypt the most immediate needs of the population — bread, jobs, social services, etc. — are the demands that continue to fuel the revolution and be the most uniting. If the political left put forth a plan using revolutionary methods to achieve these demands — reversing the privatizations, raising the tax rates on the wealthy, public works for employment, etc. — then the broader Egyptian working class would rally to achieve these goals, some of which were realized under President Nasser and reversed by Sadat and Mubarak.

The Egyptian revolution does not have years to solve these problems; the economy of Egypt is facing catastrophe, and drastic action must be taken immediately. This is one of the reasons Morsi was ejected from power: he thought he could continue the Mubarak attitude of doing nothing substantial for the majority of the population, half of which lives in abject poverty and the other half scrambling madly to avoid such a fate.

The higher expectations and new hopes inspired by the revolution must be accompanied by bold revolutionary actions capable of achieving these new expectations. Politics as usual is, a thing of the past in Egypt. The revolution can avoid the fate of entrenched Bonapartism only if it is unequivocally aimed at addressing the pressing basic economic needs of the vast majority of the Egyptian population.