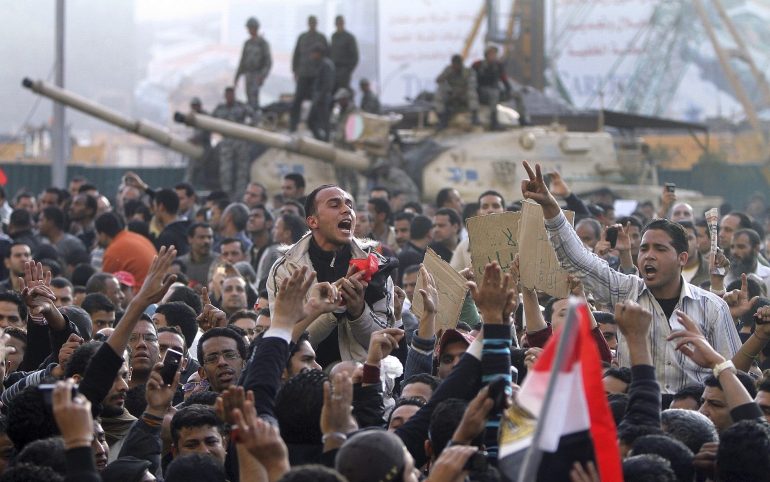 Egyptians are making history at a frantic pace. After the largest protests in Egypt’s history initiated the downfall of the first Muslim Brotherhood government, a military-led massacre of Muslim Brotherhood faithful quickly altered the political dynamic. Everything is in flux.

The people of Egypt have now deposed of two governments amid one of world history’s strongest revolutionary movements. But the massive showcase of Egyptian people-power has been met with gloom and cynicism from many progressive-minded people, who lament the loss of “democracy” in Egypt as they painfully watch the Egyptian military re-assert itself into power. “Nothing has changed,” they moan, “the same ruling class under Mubarak rules again.”

This criticism — although partially true — completely misses the point.

Some key questions to ask are: Do the recent events in Egypt push general political consciousness forward or backwards? And are the people nearer or further away from taking power for themselves? The answer is unquestionably “forward.”

The people of Egypt have learned a thousand political lessons since the overthrow of Mubarak. They have now successfully disposed of two heads of state, and will not be so easily deceived by a U.S.-backed Mubarak clone. The situation has changed in a profound way, most notably because the people have twice exercised and felt their massive power. This is key!

The most astute revolutionaries in Egypt — and there are many — have zero trust in the army. The whole country has become politicized and is learning incredibly fast from direct experience. To only see the power of the Egyptian military in this dynamic is to be color blind to the vibrant shades of revolution.

It’s true that many Egyptians have a semi-idealized view of the Egyptian military; but this is not a sheepish bow to authority, but a uniquely Egyptian perspective based on real history. Former Presidents Nasser and Sadat were military-linked heads of state who played a progressive role in many arenas of Egyptian life, especially in economics and national independence (in recent polls Sadat and Nasser remained the two most popular Egyptian politicians to date, regardless of both having died decades ago).

This bygone era of romance with the Egyptian military was partially rekindled when the military seemed to fulfill the demands of Egyptians by removing Morsi. The largest protests in Egyptian history were based on one solid demand — Morsi must go. The military, it appeared to some, listened to the people and acted accordingly. Of course the military never wanted the Muslim Brotherhood in power; the military also pursued its own interests while play-acting on behalf of the people.

Although the military was also looking out for itself, it was the massive anti-Morsi protests that acted as a smashing democratic veto to the elections that brought Morsi to power. These elections offered no real alternative to Egyptians: A Muslim Brother versus a stooge from the previous dictatorship. This especially fake form of democracy was not suited for a nation that just used revolution to destroy a dictatorship; a higher form of direct democracy thus delivered the immediate impeachment of Morsi.

The people of Egypt again delivered a revolution while the military again attempted to act as a midwife — after the revolutionary contractions already began. It’s true that only the military had the organizational abilities to care for the baby post-delivery, but it’s the Egyptian people who gave life to and still demand parental oversight over their historic offspring. The people of Egypt have no doubt who the real parents of this revolutionary newborn are, and neither does the military.

This is why the military is immediately trying to appease the Egyptian masses by getting governmental power into the hands of a civilian caretaker government that has the trust of the people. The liberals who are accepting these posts — such as U.S.-backed Mohamed ElBaradei — will be the next to expose themselves as poor parental guardians of the revolution, as did the Muslim Brotherhood before them.

The Muslim Brotherhood’s ascension to the position of revolutionary caretaker acted as an enormous barrier to the revolution’s progress, and surmounting this barrier has pushed the revolution into a whole new political territory. Now only the weakling liberals remain as brakes to the Egyptian revolution, along with the military behind the scenes and the Mubarak forces. But the people have proved themselves capable of steamrolling anything it views as a threat to its revolutionary offspring, liberals, reactionaries, and military alike.

In reality the Egyptian military’s power is overstated, easily shredded if it attempted to repress the broader revolution. The army’s rank-and-file soldier — if ordered to shoot on the revolutionary public — would rather turn its guns on the officers and generals ordering the repression. Revolutions excel at this form of redefining power — the powerful quickly become powerless. Once omnipotent dictators find themselves — as Mubarak did — literally in a cage, discarded.

After the Egyptian liberals are exposed as poor guardians of the revolution, a giant political void will open up. In politics — especially revolutionary politics — voids are quickly filled by those most organizationally ready to fill them.

Speaking to this idea, Cihan Tugal’s essay, “The End of the ‘Leaderless’ Revolution,” makes many excellent points about Egypt’s revolution suffering from an inability to organize itself sufficiently to receive the gains of the revolution. Tugal argues:

“…it is not sufficient for the system to fall. What will replace it? We have been avoiding an answer…We now have to wake up and realize that if we do not develop solid alternatives (and organizations and institutions that will implement them), the downfall of the system will not mean the making of a better world.”

In short, if the Egyptian people are not properly organized, the power will return to the army, as it has post-Morsi.

Tugal is of course correct. The Egyptian people must organize to ensure it is they who are able to care for their creation, not simply a handful of elites. Organization begins with common beliefs and interests, which in political language quickly get translated into political demands and broader social goals.

The Egyptian people do not need abstract notions of democracy, but food, jobs, social services, etc., while striving towards equality and a deeper sense of direct democracy than is offered by the stale, uninspiring U.S.-modeled electoral system.

The most modest demands in Egypt — food, jobs, public services, etc. — are at the moment the most revolutionary demands, since the majority of Egyptians will unite to fight for them in the streets, while the U.S.-backed military and its liberal coalition government are incapable of delivering them, since doing so would violate the sacred laws of neo-liberalism/capitalism.

But many pundits see only tragedy in the recent events of Egypt, rejecting any optimistic possibility. They argue that the recent events in Egypt are purely the machinations of foreign powers — again, there is evidence to partially legitimize this claim. But this analysis ignores the revolutionary X factor — the Egyptian people and the continuation of the revolution.

The essence of revolution is that the overwhelming majority of people directly intervene into politics in a way that fundamentally changes existing politics. This is opposed to a “normal” democracy, where average people mark a ballot every four or so years — if they vote at all. In non-revolutionary times people are passive and disengaged from the political process, focusing on themselves and their families; they don’t view themselves as agents of change, but victims of larger more-powerful forces. A revolution creates the exact opposite dynamic.

Most political pundits only understood the masses in states of non-revolutionary political passivity. The Egyptian people have proved this perspective wrong on two historic occasions and still this outdated narrative is clung to by observers.

To the average political pundit the motor of history freezes in place after every political uprising. The situation is not evolving but stagnant; the group that presently is in power will remain in power. Nothing will really change. The people were used as puppets for more powerful interests, and in the post uprising period the puppets will be cut from their strings, lifeless and exploitable.

This is a popular explanation of the events in Egypt, which view the downfall of Morsi as purely a pre-planned coup, and again, there is legitimate evidence of coup plotting.

But again, the bigger picture is lost by narrowing the focus here. The ruling class of any country is extremely hesitant to attempt to use the broader population as weapons against their ruling class political adversaries, since doing so is akin to steering a tiger by grabbing its tail.

In times of revolution the masses are less tame than any tiger, and have a greater capacity to think. They cannot be so easily led by the tail — or the leash — back into the cage.

Vijay Prashad writes about the dynamic aspect of revolution in his excellent book “Arab Spring, Libyan Winter.” The following passage refers to the Arab Spring in general:

“More will be demanded… The Arab lands will not be the same again…In Egypt, where the appetite for the possibilities of the future are greatest, the people continue to assert themselves into Tahrir Square and other places, pushing to reinvigorate a Revolution that must not die. They do not want to allow it to settle back into the possible forms, the neoliberal security state…They want something more. For them the slogan is simple: down with the present: Long Live the Future.”

The future of Egypt depends on several factors, though ultimately it’s a race between the Egyptian people and the elites: the people must quickly organize themselves towards an independent political path, while the ruling class frantically attempts to cajole the tiger back into its cage by a mixture of repression, political maneuvering, and religious/ethnic divide and conquer tactics.

This race is more sprint than marathon; the Egyptian people don’t have forever to solve this problem, since revolutions are by nature temporary exceptions to the historic norm. Even the mightiest tiger eventually exhausts itself in struggle, becoming more vulnerable to the zookeeper.

Yes, it’s possible that the revolution may fail. But let’s not assume its failure, but encourage it to victory. Let’s criticize its weaknesses, not fetishise them. Let’s analyze its strength in order to strengthen it yet more.

It’s possible — and even likely — that the Egyptian people will rediscover their pan-Arabic, socialist roots. But this won’t be based on a stale Soviet-era vision, but a higher historic level, opening up new political vistas that gaze upon unseen social horizons, capable of inspiring the broader Middle East towards a new political project. And possibly the world beyond it.