Members of the Syrian Democratic Forces (SDF) and US soldiers gather in the Kurdish-held town of Al-Darbasiyah in northeastern Syria bordering Turkey on November 4, 2018. - Three armoured vehicles carrying soldiers wearing the US flag on their uniform arrived in the area after renewed tensions between Ankara and Syrian Kurds, a spokesman said. Turkey last week raised threats against Kurdish forces in northeastern Syria, shelling their positions and flagging a possible new offensive. (Photo by Delil SOULEIMAN / AFP) (Photo credit should read DELIL SOULEIMAN/AFP/Getty Images)

Not only are the US, Britain and France losing their criminal covert military war for regime change in Syria, these state terrorists are also caving in on the propaganda front.

Such a criminal conspiracy was bound to fail sooner or later. Now, its weight of falsehoods and lies are imploding. The arrival of the UN chemical weapons inspection team this week in Damascus marks another hammer blow against Western malicious designs on Syria. The UN seems set to finally comply with the Syrian government’s terms for investigating competing claims about the use of deadly chemical weapons in Syria. President Bashar Al Assad and the Damascus authorities have consistently alleged that it is Western-backed mercenaries who have used the internationally banned weapons, while the Western powers have charged that it is the Syrian state forces.

Syria’s government first called for a UN inspection team back in March following a deadly exposure to the nerve agent, Sarin, in the district of Khan al Assal, near Aleppo, in which some 25 people were killed, including 16 Syrian army soldiers. However, that initiative was blocked when the UN – at the urging of the Western states – demanded that its investigators be given “unfettered access” to all sites in Syria, including military installations.

Assad’s government, supported by Russia, refused to grant the UN team such open permission because it was disturbingly reminiscent of the UN weapons inspection that had gone into Iraq 10 years ago. That team was allowed sensitive access to military sites across Iraq, which suspiciously was then followed by the US-led “shock and awe” blitzkrieg on that country beginning in March 2003.

Now, however, the UN chemical weapons top expert, Ake Sellstrom, has agreed to hold talks in Damascus at the invitation of the Syrian government. He is accompanied by UN disarmament chief Angela Kane. It is believed that the discussions will work out a modality for a proper probe in order to settle the competing claims about who used the illegal weapons.

Why have the UN weapons inspectors suddenly become more amenable to the Syrian government’s terms in the conduct of an investigation? The answer seems to be that the weight of evidence supporting the Syrian authorities’ claims has become too large to ignore.

Two developments give the Syrian government decisive credibility. In recent days, as the Syrian army pushes militants out of previously held strongholds, it has discovered a series of crude bomb factories for equipping rockets with chemical warheads. The most serious find was in the coastal city of Banias where more than 280 barrels of toxic industrial chemicals were recovered. Syria’s ambassador to the UN, Bashar Ja’afari, said that the toxic quantity was “capable of destroying a whole city, if not the whole country.”

A subsequent deadly find was in the suburb of Jobar in Damascus. After routing militants in gun battles, Syrian state forces found a makeshift chemical laboratory with supplies of highly toxic chlorine and other industrial materials. Some of the containers were stamped with “corrosive” warnings and labels saying “made in Saudi Arabia”. Among the cache were mortars intended for arming with chemical warheads.

The second major development is the latest official Russian report. These improvised chemical weapons used by the Western-backed mercenaries are consistent with a study from Russian experts that was submitted to the UN last week. The Russian investigation into the notorious incident in Khan al-Assal, near Aleppo, during March has found that chemical weapons, including Sarin, were indeed used, and that the perpetrators were Western-supported militants.

This finding not only completely negates earlier Western claims; it also exposes Western posturing, fabrication and lies told at the highest level of political office, including that of US President Barack Obama, British Prime Minister David Cameron and French President Francois Hollande.

Russia’s UN envoy Vitaly Churkin said of his country’s report: “It was determined that on March 19 the rebels fired an unguided missile Bashair-3 at the town of Khan al-Assal, which has been under government control. The results of the analysis clearly show that the shell used in Khan al-Assal was not factory-made and that it contained Sarin.”

The latter point is significant. The crudely built deadly weapons in the March attack on Khan al-Assal are part of a consistent pattern with the recent discoveries of homemade chemical warheads that the Syrian army is making as it routs Western-backed militants from their strongholds.

The imminent danger to the Syrian population – as demonstrated by recent Syrian army findings and the Russian report – has probably jolted the UN inspection team to address this issue with the urgency it demands. Tacitly, the UN team’s arrival in Damascus this week is also an admission that the Syrian government has been telling the truth all along about who are the guilty parties wielding these weapons of mass destruction. That would explain why the UN team is finally giving long-overdue respect to Syrian requests.

Moreover, as the issue unfolds, it is building into a grave indictment of the Western states. The US, Britain and France have for months been claiming that they have “evidence” that it was the Syrian government forces using chemical weapons. These powers have, in turn, used this accusation to justify their decisions to begin openly arming the militant groups in Syria.

On June 13, the Obama White House stated: “Our intelligence community assesses that the Assad regime has used chemical weapons, including the nerve agent Sarin.” The next day, the US announced that it planned to send arms to militants in Syria because Assad’s forces had “crossed a red line”. The move followed earlier British and French overturning of the European Union arms embargo on Syria.

In stark contrast to the so-called tests allegedly conducted by the US, Britain and France, the latest Russian study on chemical weapons in Syria meets international scientific standards. The Russian investigation has an independently verifiable “chain of custody” in the collection of samples and the analyses were carried out according to the Organization for the Prohibition of Chemical Weapons.

Whereas, the claims made by the Western states are based on secret information that smacks of contriving “facts” to fit their criminal political agenda of covert war and regime change. In other words, the Western regimes are engaging in baseless propaganda and lies to give themselves a license for yet more criminal war.

Western governments are therefore increasingly seen to be not only supporting depraved cut-throats and cannibals who bomb residential neighborhoods indiscriminately, kidnap, extort, murder and rape, but these same governments that preach human rights and international law are facilitating Al Qaeda terrorists in the use of internationally banned chemical weapons of mass destruction.

The visit this week by the UN chemical weapons inspectors in Syria is another landmark reversal for the Western state sponsors of terrorism. Their lies and propaganda are unraveling as rapidly as the defeats being inflicted on their proxy death squads who have been operating in Syria for the past two years.

Military defeats for the Western-backed mercenaries around Damascus, Aleppo, Homs and Idlib have come with reports of murderous infighting between the fractious so-called rebels. The treachery and brutality dispels the carefully contrived Western media image of “moderates” within the much-lionized Free Syrian Army. This outfit with its tin-pot General Salim Idriss is now seen as a nonentity, which never had any sway over the dominant groups of Al-Qaeda and Salafist mercenaries.

Likewise, video footage and reports coming out of areas of Aleppo still under siege from the Western-backed terrorists show civilians protesting against their captors. Again, this is a narrative that destroys the Western manufactured propaganda image of a population rebelling against an oppressive state. It is rather a scenario of the civilian population having had to endure the imposition of mercenaries, criminals and psychopaths – an imposition that has been orchestrated by the Western regimes in Washington, London and Paris, along with their regional proxies, Saudi Arabia, Qatar, Turkey, Jordan and Israel.

As Western state terrorism runs out of ground in Syria, so are its myths and lies that have covered up the crimes of Washington, London and Paris. The emerging truth about the use of chemical weapons in Syria typifies the collapsing criminal conspiracy. These criminal rogue regimes are now losing on all front 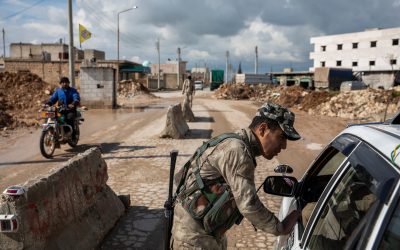