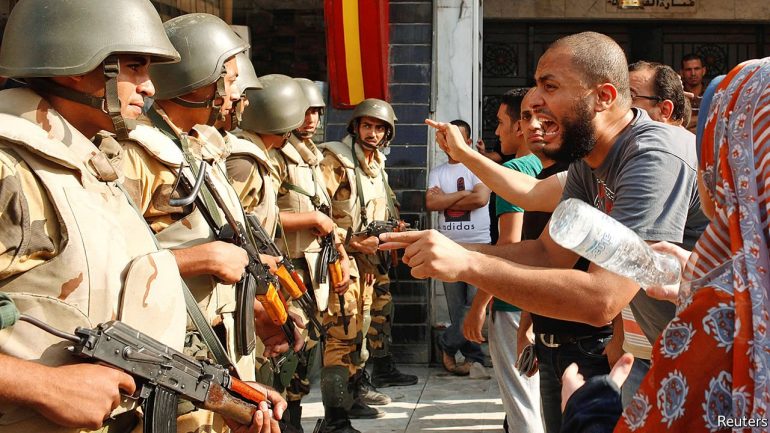 The rebirth of the Egyptian revolution ushered in the death of the first Muslim Brotherhood government. But some near-sighted analysts limit the events of Egypt to a military coup. Yes, the military is desperately trying to stay relevant — given the enormous initiative of the Egyptian masses — but the generals realize their own limitations in this context better than anybody else. This wasn’t a mere re-shuffling at the top of society, but a flood from the bottom.

In reality the Egyptian people had already destroyed the Morsi regime (for example government buildings had already been occupied or shut down by the people), which is why the generals intervened — the same reason they intervened against Mubarak: better to try to lead than be led by the people. But the people remain in the driver’s seat, no matter what “national salvation government” the generals try to cobble together to retain legitimacy before the Egyptian people.

Political legitimacy — especially in times of revolution — must be earned, not assumed. Revolutionary legitimacy comes from taking bold actions to satisfy the political demands of the people: jobs, housing, public services, etc. A “democracy” that represents only Egypt’s upper crust as the Muslim Brotherhood government did, cannot emerge from a revolution and maintain itself; it was destroyed by a higher form of revolutionary democracy.

The brief, uninspiring reign of the first Muslim Brotherhood government will alter the course of Middle East history, whose modern chapter was formed, in part, by the rise of the Brotherhood. The Egyptian Muslim Brotherhood has done the Middle East a profound favor by exposing its political and economic ideology for what it is: pro-western/capitalist economic policies that serve the IMF-dominated big banks, while preventing any real measures to address Egypt’s jobs crisis and massive inequality — itself born from previous neo-liberal privatization policies.

What did the Brotherhood do with the corrupt state they inherited? They tried to adapt; they flirted with the Egyptian military, coddled up to the security services, and seduced the dictatorship’s primary backer, the United States. They shielded all the Mubarak criminals from facing justice.

The Brotherhood’s foreign policy was also the same as Mubarak’s, favoring Israel at the expense of the Palestinians, and favoring the U.S.-backed Syrian rebels against the Syrian government, while increasingly adopting an anti-Iran agenda. A primary financial backer of the Muslim Brotherhood government was the oil-rich monarchy of Qatar (a U.S. puppet government), who helped steer the foreign policy of the Egyptian government.

The Muslim Brotherhood followed the same policies as the dictatorship because they serve the same elite interests. Consequently, political Islam will no longer be a goal for millions across the Middle East, who will opt for a new politics that will serve the real needs of the people of the region.

Political Islam outside of Egypt is also being rapidly discredited across the Middle East. In Turkey the mass protests that erupted were, in part, a reaction by the youth in Turkey to the conservative political and free-market economic policies of the Islam-oriented government.

The people of Iran recently chose the most religiously moderate of candidates to represent them, whose electoral campaign sparked an emerging mass movement.

Political Islam was already stained by the disgraceful monarchies of the Middle East. The especially corrupt and decrepit dictatorship of Saudi Arabia has thoroughly exploited Islam, where a fundamentalist version of Sharia law is reserved for the Saudi masses, while the Saudi monarchy partakes in any kind of illegal or immoral behavior it wants. Saudi Arabia’s only source of political legitimacy is its self-portrayal as the “protector of Islam” — since the holiest Islamic cities are in Saudi Arabia. But the Ottoman Empire that was destroyed in WWI also based its legitimacy on being the “defender of Islam” — both exploited Islam for political and financial power.

Of course, Islam is not the only religion that is exploited by elites. The ruling class of Israel defiles Judaism by using it to legitimize the state’s racist and expansionist policies. A nation-state based on religion — like Israel — implies that the non-religious minority be treated as second class citizens, while also implying that the “most devout,” i.e. most conservative religious groups, gain greater influence and are granted greater privileges by the state.

The same is true in the United States for the Republican Party — and increasingly the Democrats — who base much of their legitimacy on a fundamentalist version of Christianity, the inevitable result of which discriminates against non-Christians, though especially Muslims. Republicans increasingly rely on whipping up their fundamentalist Christian base against immigrants, Muslims, and homosexuals, allowing them the cover to pursue a pro-corporate and militarist foreign policy.

In the Middle East the modern history of political Islam was birthed by the Western powers after WWII, who installed and supported monarchies across the Middle East to maintain cheap oil and subservient governments; these monarchies use a fundamentalist version of Islam as their primary source of legitimacy.

This Islamic-exploitative policy was extended to fight the rise of the powerful pan-Arab socialist governments that favored a Soviet-style publicly-owned economy, first initiated by the still-beloved Egyptian President Gamal Abdel Nasser. Retired CIA agent Robert Baer discusses this pro-Islamic/anti-Soviet dynamic in his excellent book, Sleeping With the Devil, How Washington Sold Our Soul For Saudi Crude.

When Arab countries — like Syria, Iraq, Libya, Tunisia, etc. — followed Egypt’s example in the 1960′s and later took action against the rich and western corporations, the U.S. and Saudi Arabia relied ever more strongly on the Muslim Brotherhood and other Islamic extremists to destabilize these nations or steer their politics to the right.

When the Muslim Brotherhood tried to assassinate Egypt’s Nasser, he used the military and state repression to destroy the organization, whose members then fled to Syria and Saudi Arabia. Then the Brotherhood tried to assassinate Syrian President Hafez al-Assad — Bashar al-Assad’s father — who followed Nasser’s example and physically destroyed the organization. Libya’s Gaddafi and Tunisia’s Bourguiba — both popular Presidents for years — likewise took aggressive action against the Brotherhood’s own aggressive, reactionary tactics, which remained protected and nurtured by U.S.-backed Saudi Arabia.

This policy of using radical Islamists against Soviet-allied states was extended further when the U.S. and Saudi Arabia funded, armed, and trained the groups later known as al-Qaida and the Taliban against the Soviet-allied Afghanistan government. After this “success” the same policy was applied to Yugoslavia, where the radical Islamists, known as the Kosovo Liberation Army, were funded and supported by Saudi Arabia and the U.S. as they targeted the Soviet-inspired Yugoslavia government. Now, the Saudi-backed radical Islamists are being employed against the Syrian government.

With the fall of the Soviet Union, the semi-socialist Arab nations that depended on it for trade and support found themselves economically and politically isolated, and consequently shifted their economies towards western capitalist policies seeking injections of capital (foreign investment) and new avenues for trade.

This transition required neo-liberal policies — especially widespread privatization schemes — that created vast inequality and unemployment, and eventually became the main economic causes of the revolutionary movements now known as the Arab Spring. Ironically, to combat their flagging popularity, these regimes lessened restrictions on the Islamic parties as a way to funnel energy away from economic demands, while also acting as a counterbalance to the political left.

The Arab Spring toppled dictatorships but didn’t provide an organized political alternative. The Muslim Brotherhood was sucked into this vacuum, and was quickly spit out as a viable political alternative for the demands of a revolutionary Egypt and the broader Middle East.

And although the Egyptian military again holds the reins of institutional power in Egypt, it understands the people’s distrust of the post-Mubarak military, and is thus limited in its ability to act, since mass repression would further inflame the revolution and possibly fracture the army — the same way it did when former President Nasser rose to power in a junior officer’s leftist coup (a similar type of coup was attempted and failed by Hugo Chavez before he was president).

Ultimately, the Muslim Brotherhood and other similar Islamic political organizations are not a natural expression of the religious attitudes of people in the Middle East, but instead an unnatural political creation that serves a specific geo-political agenda, specifically that of the United States, Israel, and Saudi Arabia.

The Egyptian people have now had the experience of political Islam and have discarded it, in the same way a tank deals with a speed bump. Now new policies must be sought based on a different political-economic ideology, until one is found that will represent the actual needs of the people.

Until the Egyptian masses discover and organize around a platform that serves the people’s needs, a series of other governments will be constructed in an attempt to keep Egypt’s elites — and their western foreign backers — in place. These governments will be likewise tossed aside until one emerges that represents the needs of the people.

There is a valid fear that the Muslim Brotherhood will choose to take up arms in Egypt in the same way that the Algerian Islamists triggered a civil war when the military annulled the elections they had won. The Brotherhood may say, “We tried elections and the results were denied to us.”

But revolution is the greatest expression of democracy, and only by extending the revolution can a potential civil war between the Brotherhood and the military be averted. The power of both groups can be undercut by a revolutionary movement that fights for improving the living conditions — with concrete demands — of the majority of Egyptians. The lower ranks of both the army and the Muslim Brotherhood will sympathize with such a movement, allowing for a new direction for the country.

Many revolutionaries in Egypt have learned a thousand political lessons in a few short years; they will not easily allow the army to usurp their power. The Egyptian revolution is the most powerful revolution in decades and has already re-shaped the Middle East. It will continue to do so until the people’s needs are met.