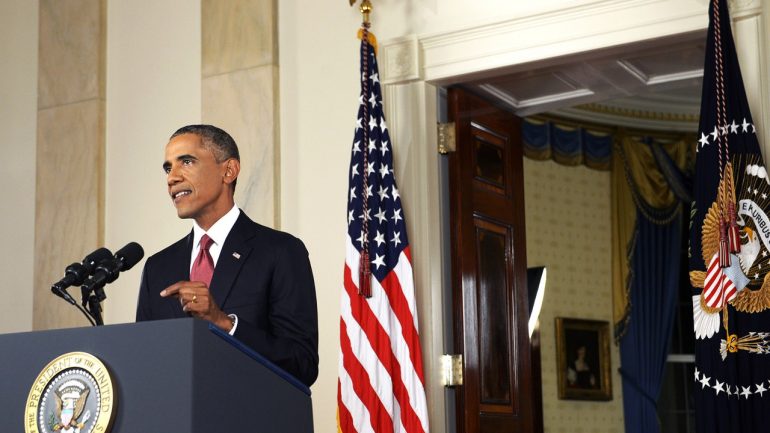 Suddenly the Islamic State of Iraq and Syria (ISIS) has become a threat worthy of American missiles. For years Obama completely ignored the biggest and most brutal terror group in the Middle East, allowing it to balloon into a regional power. No matter how many heads it severed or how much territory it conquered, ISIS just couldn’t draw Obama’s attention.

As ISIS was conquering ever-expanding territories Obama was supposedly waging a “war on terror” around the globe, drone-bombing any would-be bogeyman in Pakistan, Yemen, Somalia, Afghanistan, etc. But when a real bogeyman emerged, Obama ignored it, and so did the U.S. media, which instead followed Obama’s warmongering gaze to Ukraine, while plagiarizing the president’s endless excuse-making for Israel’s genocidal conduct in Gaza.

For well over two years ISIS and other al-Qaeda-style groups have been the main driving force in the Syrian war that has claimed over 170,000 lives, with millions made refugees. And now, suddenly, Obama wants to intervene for “humanitarian” reasons to fight ISIS. But the actual reason that ISIS attracted Obama’s missiles is that the terror group did something unforgivable: It has finally threatened “U.S. interests,” whereas before the interests of ISIS and Obama were perfectly aligned.

The indefatigable Middle East journalist Patrick Cockburn was dumbfounded by the lack of government and media attention ISIS has gotten, as the group expanded its power over huge regions of Syria and Iraq, now threatening Lebanon. Cockburn exasperatedly writes: “As the attention of the world focused on Ukraine and Gaza, the Islamic State of Iraq and Syria (ISIS) captured a third of Syria in addition to the quarter of Iraq it had seized in June…The birth of the new [ISIS] state is the most radical change to the political geography of the Middle East since the Sykes-Picot Agreement was implemented in the aftermath of the First World War. Yet this explosive transformation has created surprisingly little alarm internationally…”

Similar surprise was displayed by Noah Bonsey, a Syria expert at the International Crisis Group, who couldn’t understand the free hand Obama was giving ISIS:

“The U.S. has the clout and capacity to build partnerships capable of reversing ISIS gains, but seems to lack the necessary vision and will.”

And finally from The New York Times:

“Even after the Islamic State in Iraq and Syria, or ISIS, seized Fallujah and other territory in the western part of the country [Iraq] at the beginning of the year and marched through Mosul and toward Baghdad by summer, the president expressed no enthusiasm for American military action.”

Or any action for that matter.

While ignoring the ISIS destruction of Syria and invasion of Iraq, U.S.-led NATO issued non-stop warnings about Russia possibly invading Ukraine. But of course there were no such warnings issued — or attention paid — to Israel’s invasion of Gaza.

And whereas Obama didn’t so much as lift a finger to stop the invasion of Gaza, he recently stated that the U.S. has a “unique opportunity” to stop an ISIS massacre in Iraq; thousands of Gazans must be rolling in their freshly dug graves.

Obama’s inconsistent approach to foreign policy has confused many an analyst, who see no logic in the president’s approach to military intervention. Even Obama’s former deputy Secretary of State recently commented:

“Nobody has the sense about why [intervention] in some cases and not in others… His [Obama’s] last news conference just leaves you scratching your head. Yeah, we can’t do everything. But what matters to us?”

In reality, however, there is a definite logic to Obama’s foreign policy, where he has been disgracefully consistent throughout his presidency. For example, Obama publicly targeted the Syrian government for destruction and had no qualms about using ISIS and the other al-Qaeda-linked groups as proxies in this fight.

These terror groups were encouraged to grow exponentially in their fight against al-Assad, with Obama knowing full well that Saudi Arabia and other U.S. allied Gulf States were sending mountains of money, guns, and fighters to the jihadists. There was simply was no one else effectively fighting al-Assad, a dynamic that has expanded a war that would have ended years ago, while creating the environment that ISIS thrived in. Much of the money and guns that Obama shipped to the “moderate” Islamists rebels of course found its way into the hands of the jihadists, since thousands of moderates have since joined ISIS.

The more that ISIS did for the U.S. in Syria, the less Obama gave it attention, which is a very powerful form of passive political support. When ISIS invaded Iraq from Syria, Obama barely batted an eyelash, making excuse after excuse why the U.S. couldn’t send the Iraqi government military equipment. Imagine, however, if Saudi Arabia or Israel were invaded by a terrorist organization? Obama would have green-lighted F-16 bombing raids in minutes.

Obama’s lack of concern for the ISIS invasion of Iraq was ideologically linked to his inaction in Syria: Obama wants regime change in both nations, and is using ISIS as a de facto ally in both cases. This became quickly obvious with Obama’s response to the ISIS invasion of Iraq; he simply criticized the Iraqi government for not being more inclusive; meanwhile ISIS butchered its way through giant regions of Iraq and subjected the survivors to a more brutal totalitarianism than the U.S.-allied dictatorship in Saudi Arabia.

Further political support was given to ISIS by U.S. politicians, who essentially accepted ISIS as the ruler of the newly conquered Iraqi territories; these politicians instantly referred to Iraq as being “de facto partitioned,” meaning that ISIS had created a separate Sunni region that would be complemented by Shia and Kurdish regions.

Coincidentally, this “partition” plan just happens to be the official plan of Vice President Joe Biden, who for a while has advocated a “soft partition” of Iraq, an idea as ludicrous as a “partial” nuclear attack. As long as ISIS was “de facto” helping achieve Biden’s partition plan, Obama was fine with ISIS’ murderous rampage. And now the media informs us, unsurprisingly, that Biden’s plan has officially been “gaining momentum” in Washington D.C.

But then ISIS went too far. The red line that ISIS finally crossed was their attack against the U.S. allied Kurdish Iraqis. The Kurds govern their own oil-rich autonomous zone in Iraq, and have been steadfast U.S. supporters. The New York Times talks openly about the real, non-humanitarian motive of Obama attacking ISIS:

“Mr. Obama has been reluctant to order direct military action in Iraq [against ISIS] while [Iraqi] Prime Minister Nuri al-Maliki remains in office, but in recent weeks there have been repeated pleas from the Kurdish officials for weapons and assistance as ISIS militants have swept across northwestern Iraq.”

The Times re-enforced this perspective when talking about the views of Representative Adam Smith of Washington State:

“…he [Smith] supported intervening on behalf of the Kurds, as opposed to the unpopular Baghdad government. The Kurds are worth helping and defending.”

There you have it. The thousands who have been slaughtered by ISIS in Syria and other parts of Iraq weren’t “worth defending,” but the Kurds are different, since their leaders are U.S. allies. This sums up U.S. foreign policy in a nutshell, which has absolutely nothing to do with “humanitarianism.” Gazans are allowed to be slaughtered, Syrian’s massacred, and half of Iraq torn to shreds while Obama has busied himself with making threats to Russia.

The logical of U.S. military intervention is completely based on a cynical calculation meant to boost U.S. military and corporate power abroad, by any means necessary.

How U.S. Support of Israel Undermines the U.S.