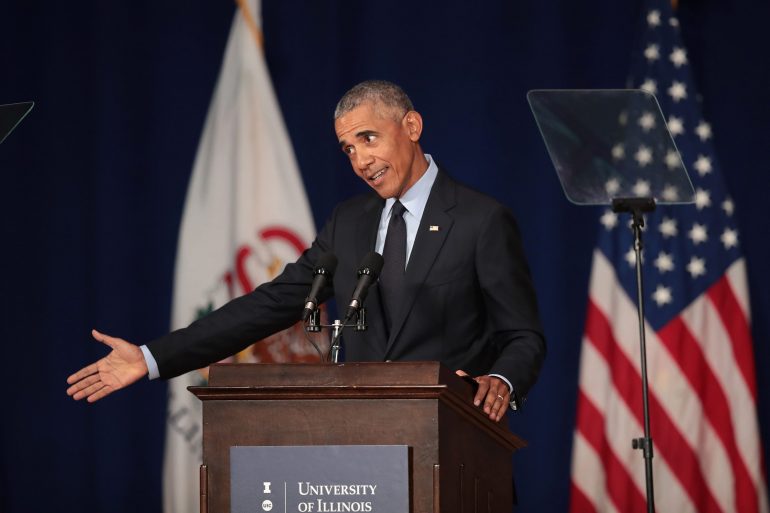 You’re not paranoid if you think the world feels more unstable — it is.  There’s a dangerous confluence of political, economic, and military phenomena that is producing a very hazardous international situation. Heightened national tensions that lead to regional confrontations have become normal as economic and political winds constantly shift in the direction of instability and conflict.

At the center of each maelstrom is the U.S. Government, and instead of acting as a promoter of peace and stability the Obama administration has been a catalyst of confrontation and war.

Whether it be the Middle East, Asia, Russia’s border, or the world economy, the actions of the Obama administration have leaned towards various forms of provocation and aggression — economic sanctions, threats, funneling arms, etc. This dynamic makes an eventual regional conflict inevitable, beyond the one already occurring in Syria/Iraq, where a U.S.-led proxy war against Syria and Iran is dangerously close to a full-out regional war.

The U.S. public is dangerously ignorant about the significance of these various regional conflicts. To the extent that they’re even reported, the “news” has excelled at blaming others and sharpening conflict, rather than shedding light or presenting peaceful alternatives.

An especially combustible zone is the Ukraine, where the U.S. is engaged in what is becoming a full-fledged proxy war with Russia. The Obama administration’s decisive role in the Ukrainian conflict has received only a sliver of space from the U.S. media, even after an audio of Obama’s Under Secretary of State was leaked, exposing the U.S.’ direct leadership role in a coup that overthrew Ukraine’s democratically elected government.

Obama’s allied boots on the ground in the Ukrainian coup were open fascists — the Svoboda and “Right Sector” — whose ideological hero, Stepan Bandera, was one of Hitler’s most reliable fascist allies during World War II.

The Obama administration has given crucial military and economic support to the anti-Russian Ukrainian government, and provided this fascist-friendly government with various forms of military assistance, and now is considering giving more “lethal” military aid to a government that cemented its coup power via questionable elections during the start of a civil war.

“If we call a spade a spade, America has pulled us into a new cold war, trying to openly implement its general idea of triumphalism. Where will it take us all? The [new] cold war is already on. What’s next? Unfortunately, I cannot say firmly that the cold war will not lead to the hot one. I’m afraid that they might take the risk.”

This “new cold war” is warming quickly, since the U.S.-Russian proxy war in Ukraine shares a large chunk of Russia’s border, and like all wars borders are ignored when convenient. Gorbachev fears that the 5,000 dead Ukrainians and 1.5 million refugees may just be the detonator for a larger war between two fully nuclear countries. Meanwhile, the U.S. media completely ignores this very real threat, giving valuable political cover to Obama’s reckless actions.

Equally crazy is Obama’s longstanding policy in the Middle East, where his “no troops on the ground” mantra has led to non-stop drone bombing and a massive proxy war in Syria, which every nation in the region has directly contributed to. The 200,000 dead and millions of refugees have boiled political tensions across the region, and Obama’s dedication to regime change in Syria is partially due to his dedication to the two biggest pariah nations in the world — Saudi Arabia and Israel.

When Israel recently bombed Syria again — a now regular occurrence — an Iranian general and Hezbollah leader were killed in the attack, which was labeled an assassination. Soon after, it was revealed that in 2008 the U.S. and Israel organized a terrorist attack in Lebanon that killed a Hezbollah leader. Both events push the Syrian conflict to the tipping point of regional war, and Obama’s silence over Israel’s repeated bombings against Syria only encourage an extremely dangerous regional conflagration.

Equally reckless is that Obama’s Syrian proxy war relied on thousands of Islamic extremists from neighboring countries.  Obama’s funding, training, and tolerating these extremists created the ideal conditions for a group like ISIS to rise from obscurity into a regional colossus.

To date the Obama administration has proposed no peace plan for Syria outside of “regime change.” When the Russian government recently organized a major peace conference to address the Syrian war, the U.S.-led Syrian National Coalition boycotted the talks, and Obama put no public pressure on his allies to attend, when he should have been publicly demanding it. Once the peace conference started neither Obama nor the U.S. media cared much to talk about the happenings, since continued fighting is the priority.

One shouldn’t forget Obama’s Africa policies, where his “successful” bombing campaign-turned regime change in Libya has ruined a country that previously had the highest standard of living on the continent, second only to South Africa. After Obama waged an illegal, aggressive war and assassinated the Libyan president, Muammar Gaddafi, Hillary Clinton said — while giggling — “we came, we saw, he died.”

Libya’s weapons were looted and are now, according to the U.N., being funneled throughout the Middle East in Africa, destabilizing neighboring countries and empowering the Islamic extremists that Obama allied with against Gaddafi (similar to the ones he allied with against Syria’s president).

When it comes to the global economy Obama has been launching financial weapons of mass destruction against his enemies. The economic sanctions against Iran, Russia, N. Korea, Venezuela, Syria, etc., are of course an act of war. This kind of war is described in the book, Treasury’s War, by former Under Secretary of the U.S. Treasury, Juan Zarate, who glamorizes this “new” form of war that the U.S. has a monopoly over, given the U.S. dollar’s preeminence as the global reserve currency.

Another lethal non-military weapon Obama has recklessly used is his helping crash the price of oil. The U.S. media publicly discussed the anti-Russian motive behind Obama intervening in the oil markets, by starting to sell the “strategic oil reserve” held by the U.S. government — intended to be used at times of severe shortages. But Obama started unloading the strategic reserves at a time when there was already increasing global supply. The oil price floor fell out when Obama persuaded Saudi Arabia to ramp up production, flooding the market with cheap oil.

And whereas the Obama administration has kept mum about the Saudi’s accomplice role in crashing the oil market, the Saudis themselves have been pretty open about using their oil weapon to force Russia to drop support for Syria’s President Bashar al-Assad. The New York Times reported:

“Saudi Arabia has been trying to pressure President Vladimir Putin of Russia to abandon his support for President Bashar al-Assad of Syria, using its dominance of the global oil markets at a time when the Russian government is reeling from the effects of plummeting oil prices.”

Russia’s economy is consequently in free fall, with Iran, Venezuela and every other oil-producing nation suffering massive economic consequences. All of this is barely mentioned in the complicit U.S. media, content with shrugging its shoulders over the subsequent political chaos that directly affects hundreds of millions of people globally, and threatens to boomerang back on the U.S. in the form of unemployment and economic disruption.

All of the above policies have directly created havoc internationally. And today’s world is more inter-connected than ever; the chaos in the oil markets has already caused layoffs in the U.S., and threatens a larger economic conflagration. Obama’s policies in Libya, Syria, Iraq, and Afghanistan have greatly increased the likelihood of another terror attack in the U.S.

In a world of increasing danger and threats of war, the Obama administration has been completely unable to champion any serious peace proposal. His main contribution to global affairs has been chaos and death — either by proxy (Syria and Ukraine), drones (Pakistan, Yemen, Somalia, etc.) dollars, gun trafficking, sanctions, or direct military intervention (Afghanistan and Libya).

Even the pathetic “peace process” Obama faked with Israel-Palestine was revealed as farce the second Israel decided to re-destroy the Gaza Strip: Obama gave crucial support to Israel in committing its numerous war crimes.

Obama is aided and abetted in his reckless actions by a media that cheer-leads the government’s every move, except when it encourages a more “aggressive” approach. In this way the above realities of U.S. foreign policy — and the very real dangers they present — are completely obscured from the American public. And when the next inevitable military combustion occurs, the public may be disorientated just long enough to fall victim to scapegoating and fear mongering that can lead to a bi-partisan military “solution.”

A New Push for Peace in Syria?