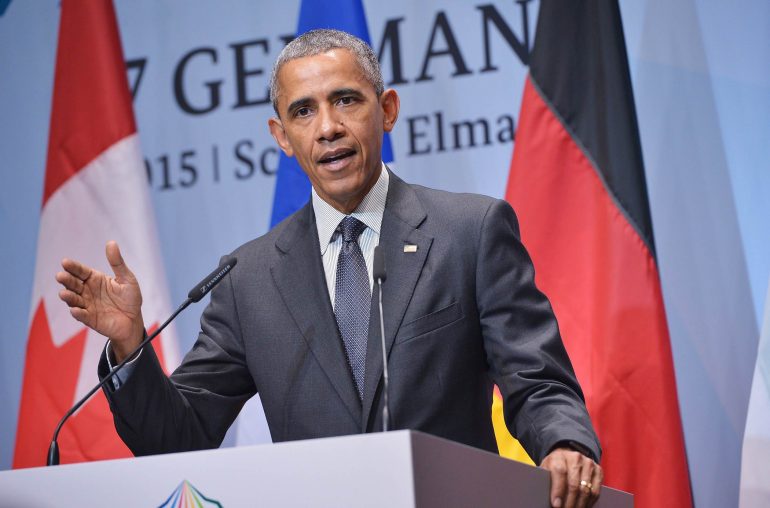 US President Barack Obama speaks during a press conference at the G7 Summit at the Schloss Elmau castle resort near Garmisch-Partenkirchen, in southern Germany on June 8, 2015. AFP PHOTO/MANDEL NGAN (Photo credit should read MANDEL NGAN/AFP/Getty Images)

Obama’s ISIS speech would have provoked outrage if Bush gave it. Now, however, Democrats and Republicans are united over foreign war to such an extent that a prolonged military campaign without congressional approval barely raises an eyebrow. So one year after an attack on Syria was rejected by the American public bombs will be dropping after all.

More surprising than the bi-partisan escalation of Middle East war is the complete absence of strategy. Obama’s speech ignored the fundamental causes of ISIS’ rise, while putting forth a military strategy of pure fantasy. The only guarantee of Obama’s war strategy is the unnecessary prolonging of the Syrian conflict and the further growth of Islamic extremism. It’s as if President Obama hasn’t figured out the ABC’s of terrorism: the more you bomb, the more extremists you create. It isn’t rocket science.

The 13-year “war on terror” has fundamentally failed, creating an exponential growth in Islamic extremism, now sprawling across the very epicenter of the Middle East where its presence before was miniscule.

The president’s speech ignored how his strategy to fight the secular Syrian government — funding, training, and arming the Syrian rebels — has directly contributed to creating giant militias of Islamic extremists, filled with money and jihadists from Obama’s Gulf state allies of Saudi Arabia, Qatar, and Kuwait. If not for the U.S.-backed rebels in Syria, the conflict would have ended long ago, and ISIS would have remained marginal.

But instead of admitting that this failed approach helped create ISIS, Obama has doubled down on his ludicrous plan to further arm and finance the “moderate” opposition in Syria. The New York Times discussed the holes in Obama’s strategy:

“… Mr. Obama is still wrestling with a series of challenges, including how to train and equip a viable ground force to fight ISIS inside Syria, how to intervene without aiding President Bashar al-Assad, and how to enlist potentially reluctant partners like Turkey and Saudi Arabia.”

None of these issues are to be resolved, only compounded. Of course President Assad will benefit if Obama attacks his enemy ISIS, in the same way that ISIS has been benefitting the last two years from the U.S.-backed proxy war against President Assad.

“So far it looks as if Mr. Obama will dodge the main problem facing his campaign against Isis. He will not want to carry out a U-turn in U.S. policy by allying himself with President Assad, though the Damascus government is the main armed opposition to Isis in Syria. He will instead step up a pretense that there is a potent “moderate” armed opposition in Syria, capable of fighting both Isis and the Syrian government at once. Unfortunately, this force scarcely exists in any strength and the most important rebel movements opposed to Isis are themselves jihadis such as Jabhat al-Nusra, Ahrar al-Sham and the Islamic Front. Their violent sectarianism is not very different to that of Isis.”

Later in the article Cockburn explains that the negligible moderate force is dominated by the CIA.

Obama dared not say explicitly that his plan to fight ISIS included a plan to fight the Syrian government, but that’s exactly what he implied by continuing to arm, fund, and train a “moderate” Syrian opposition that is fighting both ISIS and Assad.

But now many congressmen from both parties would like Obama to act without Congress, since midterm elections are nearing and no congressman wants to be on record voting for war, since Americans are fed up with it. Better to skip democracy and have the president declare war unilaterally, war weary voters be damned.

Lastly, Obama failed to mention that perpetual war is the new normal for the U.S. government, no matter which party is elected. By not addressing any of the above-mentioned issues, a serious analysis was shelved in favor of the Bush Jr. circular logic that can be used to rationalize war forever, creating new generations of Islamic extremists that will justify permanent war. There can be only one real solution: remove the U.S. military from the Middle East.