A New Push for Peace in Syria? 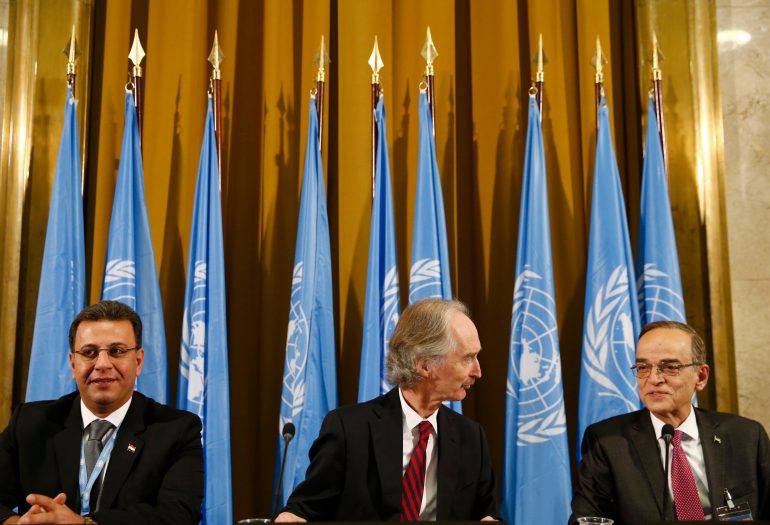 Why are there no serious peace talks to end the war in Syria? After robbing over 130,000 people of their lives, and evicting over 9 million refugees from their homes, the Syrian war has infected nearly every region of the Middle East. Yet among the U.S. and its regional allies there are no public discussions about a viable peace plan, only war talk.

It’s hard to talk peace when the United States is still maneuvering for war, having recently given $500 million to arm and train Syrian rebels, while also brokering a deal with Saudi Arabia to open a new Syrian rebel training camp, in addition to the one already functioning in Jordan. Instead of using Obama’s vast Middle East influence for peace he has used it to push war.

The brilliant failure of the U.S.-led Geneva peace talks on Syria was done without the seriousness demanded by the wholesale destruction of a nation. Obama used the talks to pursue “U.S. interests,” having purposely excluded Iran from the talks while trying to leverage disproportionate power for Obama’s “Free Syrian Army” rebels, who enjoy minuscule power on the ground while using the peace talks to make giant demands.

Obama played a passive role in the peace talks, allowing them to flounder instead of publicly putting forth serious proposals that reflected the situation on the ground. There have been no talks since January and Geneva III is yet unscheduled, while Obama seems committed to giving the rebels more bargaining power via more war, the logic being that if the rebels are armed and trained appropriately, they’ll eventually be able to win back enough land to force the Assad government to bargain on equal terms.

The giant void in the market for peace has opened up opportunities for Russia and Egypt, who reportedly are attempting to insert themselves as leaders in Middle East diplomacy, in part to expand their influence, in part to protect themselves from the conflagration of Islamic extremism the conflict is producing.

“Moscow and Cairo are preparing for a conference between the Syrian regime and the opposition in the hope of bringing them together in a transitional government that ‘fights terrorism’…the agenda of the conference to be held between the two sides includes establishing a transitional Syrian government with extensive powers while maintaining Syrian President Bashar al-Assad’s authority over the army and security institutions.”

If such a proposal comes to fruition its merits must be seriously debated on the world stage, where Obama would very likely do his best to sabotage the peace. This is because Obama’s rebels on the ground in Syria — loosely organized under the “Free Syrian Army” banner — are powerless, and a Russia-led peace process would reveal this fact and apply it to a peace treaty, leaving little influence for the Obama administration in the new government. This is a peace deal Obama would rather kill.

Obama’s rebels are weak while the Syrian Government has made substantial military gains. Most notably a recent peace deal was won in Syria’s largest city Aleppo, modeled after the peace deal in Homs that allowed rebels to leave unarmed while giving de-facto control of the city to the government.

Fisk’s analysis of the FSA punctuates the perspective of many who have long questioned whether the FSA had been totally absorbed by the Islamic extremist militias. At most the FSA exists in tiny irrelevant pockets, though Fisk thinks the FSA might be an Obama administration fantasy used to justify the ongoing Syrian war.

Aside from Obama’s weakness on the ground, there are broader geo-political reasons Obama would reject a Russia/Egypt-led peace. For one, the Obama Administration only recently made a long term investment in war, by giving the $500 billion to the Syrian rebels and training thousands more in Saudi Arabia, actions that effectively dismissed any meaningful reconciliation with Iran.

If Obama followed the lead of Russia and Egypt in the peace process, his allies would abandon him, since they’ve invested huge sums of money, arms, and their political livelihoods on making sure their governments and domestic companies profit off of the demise of the Syrian government.

This is the basis for the complete geo-political stalemate in the Middle East. Of course the giant U.S. corporations that benefit from Middle East dominance are applying maximum pressure to continue war. The stalemate has become so obvious and destructive in Syria that Russia and Egypt have inserted themselves as power brokers, which would act to bolster their political-economic leverage while pushing the U.S. out.

Regional power scrambling aside, if a rational peace deal were put forth —whether it’s brokered by Russia, Egypt, or whomever — the world must demand that peace be pursued, lest the Syrian catastrophe continue.

Obama and his regional allies have proven totally incapable of producing any realistic peace proposal — they’ve been too consumed with war. Obama has yet another chance to recognize the results of this failed proxy war and accept a peace that is a 100,000 lives overdue, or it can forge ahead to expand the killing. Stopping the war is as easy as acknowledging the reality, and to forge a treaty that reflects it.

Why Obama Rejected Peace With Iran

by Patricia Thomas1 day ago
Finance,