Bernie Sanders is No Jeremy Corbyn 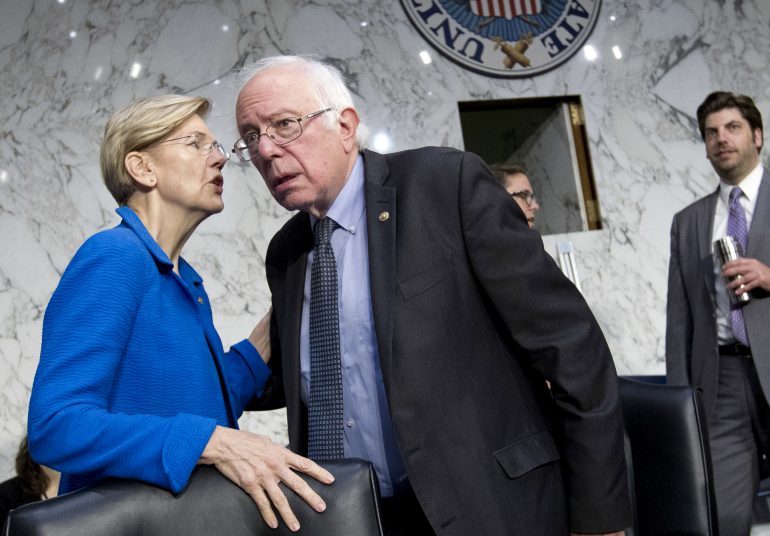 It is becoming popular to compare the campaigns of Bernie Sanders and Jeremy Corbyn, as if the two belong to the same “populist” movement, marching in the same direction from different sides of the Atlantic. Far from being significant, however, their points of agreement are entirely superficial and only serve to mask the almost diametrically opposed political trajectories of the two campaigns.

Sanders, for example, has been credited by people like former Secretary of Labor Robert Reich with creating a movement. Reich, in fact, has pointed to this “movement” as a principal reason for endorsing Sanders over Clinton: “I endorse Bernie Sanders for President of the United States. He’s leading a movement to reclaim America for the many, not the few. And such a political mobilization — a ‘political revolution,’ as he puts it — is the only means by which we can get the nation back from the moneyed interests that now control so much of our economy and democracy.”

But attaching the label of “movement” to the Sanders’ campaign mistakes appearance for reality. Sanders’ rallies have certainly attracted large crowds – even larger than those of Obama in 2008. But a crowd is not a movement.

In order to create a movement people must belong to an on-going organization where they participate in the important decision-making of that organization. In this way they play a significant role in defining the direction of the organization, and thus it becomes a part of their own identity as well. Even more, they establish relations with one another where they discuss and debate issues of policy, allow themselves to be influenced by the arguments of others, and influence them in turn. Participants are transformed from isolated individuals into members of a collective will.

But in the Bernie Sanders campaign his supporters do not play a role in establishing campaign policy. His campaign is top-down — like virtually all institutions in capitalist society — where Sanders dictates policy to his supporters. The fans who attend the Bernie Sanders rallies leave as isolated and atomized as when they arrived; they establish no relations among themselves. And Robert Reich should be assured that no political formation that is not itself democratic will succeed in democratizing society.

Sanders is not stupid; he knows he needs a movement to implement his program, given the power of the entrenched special interests of the 1%. But he also knows the risk of creating a movement: you lose control of the organization. Because he refuses to create a movement, his campaign takes on the quality of a fake veneer. This conclusion is forcefully confirmed by his operating within the Democratic Party, an almost entirely top-down organization that offers little more than lip service to working people. And it is confirmed once again with Sanders’ insistence that he will support Hillary Clinton if she wins the Democratic Party nomination.

The differences between Sanders and Jeremy Corbyn here are stark: Corbyn was elected to his position as head of the Labor Party, and he is accountable to his supporters. Although Sanders was elected as a U.S. Senator, no one elected him to run for president, and he is not accountable to his supporters in his campaign for president. In contrast, Corbyn’s Labor Party is structured so that its members can play a role in defining the Party’s policies, and Corbyn intends to amplify and enhance this option:

“Why not give members the chance to take part in indicative online ballots on policy in between annual conferences – and give our grassroots members and supporters a real say?” he asks, and then adds: “We want to see this democratic revolution extend into our party, opening up decision-making to the hundreds of thousands of new members and supporters that have joined us since May.”

This move towards democracy is already playing out in relation to the Trident nuclear submarine controversy. As International Viewpoint has reported, “But what horrifies the right even more is the way Corbyn is proposing taking the decision on Trident. He has said that it will be the membership, either at conference or a membership vote, that will decide the issue —sidelining the Parliamentary LP and the policy forums.”

Corbyn truly is creating a movement, thanks in large part to this democratic thrust. Thousands of young people have flocked into the Labor Party in order to have a voice in formulating party policy.

Aside from the question of party democracy, there is a second and related pivotal difference between Sanders and Corbyn. Sanders, of course, has advertised himself as a “socialist,” although many genuine socialists have taken offense at his use of the label. For Sanders, several capitalist countries in Europe are “socialist” and should be emulated. In other words, capitalism with a stronger social safety net and stricter government regulation of business for him qualifies as socialism.

Corbyn, on the other hand, is moving against privatization in favor of the socialization of services so that they can be democratically controlled and operate in the interests of the public. As reported by the BBC, Corbyn has argued:

“Privatisation isn’t just about who runs a service, it’s about who services are accountable to, it’s about who shares the rewards, about protecting the workforce and getting a good deal for local people who use the services. After a generation of forced privatisation and outsourcing of public services, the evidence has built up that handing services over to private companies routinely delivers poorer quality, higher cost, worse terms and conditions for the workforce, less transparency and less say for the public. We will give councils [councils are elected local governments] greater freedoms to roll back the tide of forced privatisation.”

In other words, Corbyn wants an economy that operates in the interests of the people. Privatization, although heralded by capitalists as the superior alternative because of its “efficiency” and “cost-effectiveness,” has in fact a miserable track record due to its pursuit of profit-maximization at all costs.

Finally, as has been well documented, Sanders has basically supported U.S. imperialism. He supported the bombing of Libya, the invasion of Afghanistan, he voted to fund the Iraq war, supported the U.S. war on Yugoslavia, and supports Israel.

Going in the opposite direction, Corbyn “has consistently been opposed to ‘military interventions’ on principle, including what he has called the ‘disaster’ of the 2003 Iraq invasion,” according to the BBC.

The article continues: “He has said he will oppose any new vote in Parliament for air strikes against the so-called Islamic State (IS) in Syria as well as Iraq, because bombing would only make IS militants stronger.”

Highly critical of U.S. militarism and NATO, Corbyn wants to place human rights at the foundation of foreign policy while rejecting military intervention in favor of diplomacy. In this way, he argues, the safety of the British people will actually be better secured.

Chris Hedges has reported that he and Kshama Sawant “privately asked Sanders at a New York City event where we appeared with him the night before the 2014 climate march why he would not run for president as an independent. ‘I don’t want to end up like Ralph Nader,’ he told us.” In other words, Ralph Nader is treated like a pariah by virtually the entire Democratic Party.

But there is nothing wrong with how Ralph Nader ended up. His many articles are widely disseminated and significantly influence public opinion. Of course, if the criterion for success is that he walks the corridors of power, rubbing shoulders with power brokers and sharing in their immense privileges, then Nader can be judged a failure.

At the other end of the spectrum, Jeremy Corbyn, in a 2015 interview with Middle East Eye, described his own campaign in this way: “This is a campaign about ‘we,’ not ‘me.’

By putting democracy at the center of his politics, Corbyn is creating a movement that aims at serving the people. Although the Labor Party is not revolutionary, Corbyn is setting in motion a dynamic that could lead in that direction. Sanders has borrowed the rhetoric of democracy while waging an undemocratic campaign in an undemocratic party surrounded by an undemocratic economy. Even if he were to win the presidency, Sanders’ campaign would go no further than Obama’s in producing “change.”

It’s Not Too Late For Unions to Win Friedrichs