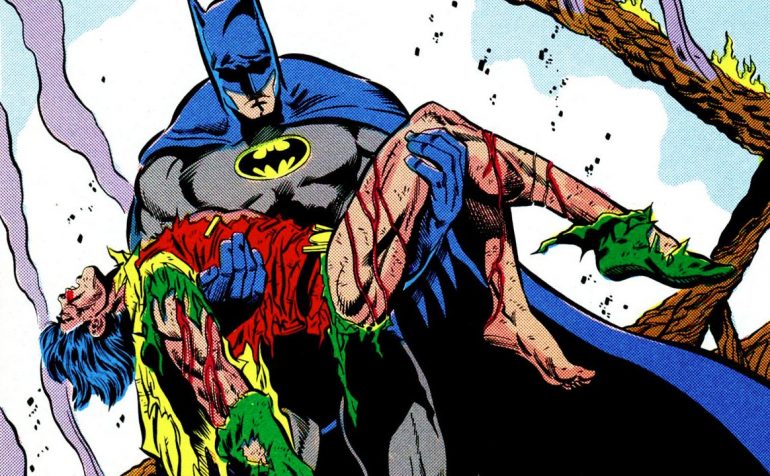 To be honest I didn’t follow DC Comics that much when I first read Sue Dibny’s death so to me Sue Dibny’s death was not a big deal. But the writing in Infinite Crisis was good enough that I could tell how important it was to the other characters.

I love the 80’s so I had to include at least one death from a comic book of an 80’s cartoon. Unfortunately nobody ever dies in the G. I. Joe cartoon but the comic book wasn’t afraid to kill off characters, especially the characters on Cobra’s side. During Marvel’s G.I. Joe series there was a Civil War that broke out among the Cobra faction. As a result Zartan killed Serpentor.

By now we all know the origin of Batman. A small time criminal killed Bruce Wayne’s parents on their way home from a movie theater. From then on Bruce Wayne decides it is up to him to rid Gotham City of crime as a superhero named Batman. We don’t actually see the death of the Waynes in real time but it is still a great comic book death because it shapes one of the most well known comic book characters.

Matt Murdock just doesn’t have much luck with women. Karen Page was one of Matt Murdock’s romantic interests. In one issue of Daredevil, Karen Page returns home and finds Daredevil being beaten to death by one of his foes, Bullseye. Karen Page picks up a gun and gets Bullseye to leave but as Bullseye leaves he suddenly turns and throws Daredevil’s baton at him. Karen Page leapt in front of him and took a blow to the chest. Karen Page then died in Matt’s arms.

During the 90’s one of the main storylines in the X-Men Universe was a mutant-killing virus called the Legacy Virus. One of the victims of the Legacy Virus was Illyana, the younger sister of Colossus. The X-Men’s resident scientist Beast found a cure for the Legacy Virus but the cure would kill the first user before it became airborne. Knowing what the Legacy Virus could do Colossus injected himself with the cure and sacrificed himself to save his fellow mutants.

Captain America has been the biggest death this year and for the past several years. After the Civil War between Marvel’s superheroes Captain America finally surrendered. As Captain America was being brought to the courthouse he was shot by a sniper and then in the commotion was shot three more times. The plan was, of course, the work of the nefarious Red Skull.

The relationship between Matt Murdock and Elektra Natchios was very complicated. Though the two were in love in college they found each other on opposite sides of the law. Matt Murdock was crime fighter Daredevil and Elektra was head assassin of the kingpin of crime. Kingpin ordered Elektra to kill Foggy Nelson, Matt Murdock’s partner, but she couldn’t do it. Eventually Kingpin forced Bullseye and Elektra to fight to the death to decide which one would be his assassin. Bullseye won the fight and stabbed Elektra with her own sai. Elektra crawled to Matt Murdock’s home and died in his arms. He has to be tired of that happening.

Spiderman has many more well known villains but one of the best Spiderman stories was “Kraven’s Last Hunt” starring Kraven the Hunter. Kraven is a great hunter that always gets his prey. He gets tired of capturing easy prey like lions, tigers, and bears so he decides to capture Spiderman himself. Kraven tries catching Spiderman unsuccessfully for years. In “Kraven’s Last Hunt”, Kraven finally captures Spiderman and shoots him. After defeating his enemy and proving he was better, Kraven no longer had a purpose and turned his own gun on himself and committed suicide.

Jean Grey has now died more times that I can count, each one cheapening deaths everywhere more and more but the first death was actually pretty special and was probably the first major death in the X-Men world. After being consumed by the power of the Phoenix, Jean Grey knows the only way to stop the Phoenix from killing everybody she loves is to commit suicide.

For the first time ever the writers of a comic book put the ending of their comic in the hands of the fans. Fans could call a 900 number and decide how the comic book ended. Comic book fans showed that they are either sick or they hated Jason Todd because they voted for him to be killed. Batman’s long time rival, the Joker, did the honors and comic book fanboys rejoiced.

Like the death of Bruce Wayne’s parents the death of Uncle Ben shaped the life of one of the most famous characters in the comic book world. When Peter Parker first acquired his abilities he used it for personal gain. It wasn’t until the death of his Uncle that he decided to use his powers for good. It was Uncle Ben who gave Peter Parker that famous piece of advice, “with great power comes great responsibility.”

For many years Superman was the number one superhero. He was unbeatable, indestructible and nothing could stop him. So naturally it was a huge news story, not just comic book news story, when the unthinkable happened and Superman died. Superman’s return was inevitable but at the moment that Superman died it was one of the biggest moments in comic book history.

Gwen Stacy might not be a huge superhero like Superman and her death didn’t shape anybody’s life like the Waynes or Uncle Ben but Gwen Stacy’s death was probably the most shocking death of all time, maybe the most shocking moment in all of comic book history. At the time of Gwen Stacy’s death it wasn’t very common to kill comic book characters so when the Green Goblin threw Gwen Stacy off a bridge it was the first time comic book readers had seen that kind of brutality.