Can the Left Survive a Trump Presidency? 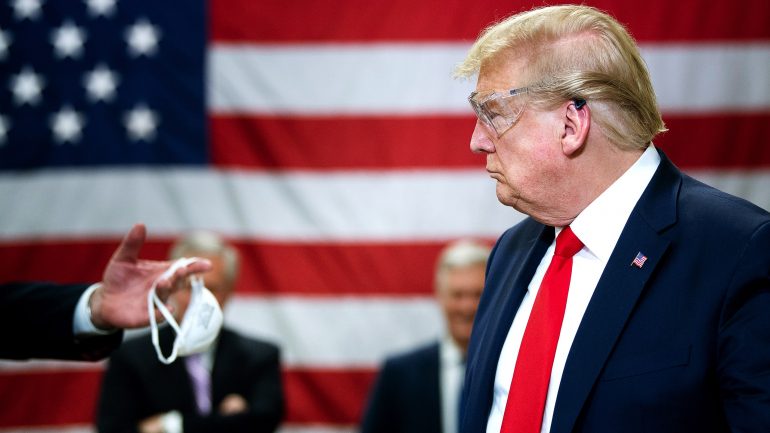 The disbelief triggered by Donald Trump’s candidacy exposed a mass crisis of confidence in the establishment, whose policies alienated the electorate, creating a Trump-sized political void. Trump seems strong because the establishment is so weak, and hated.

Trump himself is a decades-old member of the establishment, but his entry into politics provoked vitriol from his former buddies. It’s an embarrassment to their rule that Trump is a contender to lead the country.

The ruling class has consequently unified behind Hillary Clinton: Republicans, billionaires and conservative military generals are flocking to her as they holler about Trump’s lack of credentials.

The establishment’s shallow anti-Trump rhetoric contrasts with the legitimate fears coming from vulnerable populations and the Left in general, which ring anti-Trump alarm bells for different reasons.

A Trump presidency does pose a direct threat to ethnic and religious minorities, to women, immigrants, labor, and basic democratic rights. These are all real concerns, but how large is the threat, and can the Left survive it?

A worst-case scenario was presented by Arun Gupta, an astute journalist and analyst whose recent article was entitled “How a Trump Presidency Would Unleash a Torrent of Racist Violence – and Devastate the Left.”

It’s a good read. Gupta envisions President Trump using the full powers of the federal government — including the National Guard —  to stop protests, attack reproductive rights, attack unions and immigrants, and outlaw Black Lives Matter, while “White supremacists, Neo-Nazis, the Klan, and the Alt-Right would all be welcome into his administration, overtly or covertly…”

Many of Gupta’s points are obviously correct. And several of them would be correct in the context of any Republican president in 2016, especially after eight years of a Democratic president.

The bolder assertions of Gupta’s deserve closer scrutiny, including his assumption that “Black Lives Matter will be declared a domestic terrorist outfit” and “there will be no more climate justice movement,” etc.

A mass movement is a central component of fascism, which is used as a hammer to violently smash existing working-class organizations and movements. The classic example of this dynamic remains Nazi Germany.

Gupta characterizes Trump’s campaign — correctly — as a “proto fascist” movement, meaning embryonic fascism, which may or may not develop into a fetus, let alone a baby. Proto-fascism has the DNA necessary to develop into a fully developed fascist movement, but without organizational sustenance and ideal conditions, the embryo withers.

While Gupta is right to warn of the threat, he overstates its imminence. A Trump presidency would feed the fascistic fetus in some ways while likely poisoning it in others.

A comparison of Trump’s campaign to the Nazi movement is helpful to illustrate. German fascism was a genuine, organized mass movement, with the Nazi party becoming the biggest political party in Germany. The party also had a massive paramilitary wing, the “Brownshirts,” which at its height had three million well-organized troops.

When Hitler came into state power, he brought with him his personal army, a massive political party with its own distinct, powerful ideology.

Regardless, Gupta is right to criticize the U.S. Left for believing the establishment will save them from Trump. The ruling class fears organized workers far more than their old friend Donald.

The establishment, however, doesn’t arbitrarily dabble with fascism; they use it only when necessary, since engaging with fascism causes political and economic disruption, making profits less predictable.

Historically, a large section of the establishment opens its arms to real fascism when they literally fear for their life. Fascism is the “nuclear option” for capitalists, who use the far-right ideology to prevent the Left from taking power, so that capitalism can be preserved, and with it the large profits for the wealthy.

When Germany’s capitalists invited Hitler into power, the country was in shambles. The establishment was led by President Hindenburg, whom the Left rallied around as the “lesser evil” to Hitler.  After winning the election, the lesser-evil Hindenburg acted as the establishment figurehead, by appointing Hitler to be Chancellor.

The German establishment needed Hitler to save capitalism, which was in imminent danger of being overthrown by the millions-strong and growing Socialist and Communist movements, led by mass organized parties.

The balance of power between the establishment and the working class was nearly even. Consequently, the establishment could not rule effectively. Protests were numerous, employers were under attack with strikes, and pro-capitalist reforms could not be implemented without risking insurrection.

Hitler and the German establishment were in total agreement that the Socialists, Communists and the trade union movement were too powerful, and had to be crushed. The first inhabitants of the concentration camps were leaders of the Left.

The situation in the U.S. is nowhere near 1930’s Germany. The U.S. establishment doesn’t yet need Brownshirts to save capitalism. Yes, widening inequality is an inherent and growing threat to U.S. capitalism, but a new Hitler isn’t yet needed to smash the Left. This dynamic is ultimately what will prevent a President Trump from being too large a threat in the immediate future.

Yes, Gupta is right that white supremacists would be emboldened with a Trump victory, but they would likely experience a quick letdown, as Trump quickly gets incorporated into the Republican establishment. There is a reason he didn’t run as an independent or form a new party. His leverage within the Republican Party will be much less than Hitler’s leverage when entering office.

Behind the scenes Trump is already good friends with the establishment, whereas Hitler was an actual outsider who led and organized a real mass movement of the middle class, from scratch.

Trump’s followers will be completely let down by him in office, minus a smattering of racist policies plus the usual Republican program.

Gupta’s article also includes another big assumption about U.S. politics: that electing Republicans is bad for social movements and the Left in general. This was definitely true under President Reagan, but sometimes the opposite is true.

President Obama was in many ways awful for the Left: the anti-war and immigrant’s rights movements were decapitated. Both were powerful movements against Bush, and Obama continued Bush’s approach to wars and immigration, deporting more people than Bush and destroying Libya and Syria, matching Bush’s destruction of Iraq and Afghanistan.

If Trump becomes president, the various social movements — labor, peace, immigration, women, LGBT, Black Lives — will be given free reign to fight back by the Democrat-affiliated media and politicians, who will all discover the backbones they lost while Obama was in office. Good examples of media are Jon Stewart and Stephen Colbert, who were brave pit bulls against Bush but toothless puppies under Obama.

In this sense, a Republican president can open space for the Left, even as they attempt to implement policies against it, while Democratic presidents shut off political space. Under Obama, protests were discouraged. Challenging politicians with bold demands was prohibited as the working class was told to defend Democrats from the right wing. Politics was stifled.

These are genuine movements to varying degrees, since they were either created by independent working class initiative or maintained by the energy of working class people, often despite a leadership who did little to nothing to support them.

Gupta envisions these movements being smashed by Trump. But a movement is sometimes harder to crush when it’s not well organized, especially when it’s in a fighting mood.

When the left was smashed in Germany, it’s precisely because they refused to fight, with Stalin famously relying on the German electoral system to eventually bring the Communists to power. Stalinists argued, “after Hitler, our turn.” This unwillingness to mobilize — as Leon Trotsky persistently denounced — allowed Hitler to brag that he came to power without “one single window-pane being broken.”

It’s possible that a President Trump might overplay his hand by taking the bold actions Gupta envisions. The backlash this could create is possibly just what the Left needs. The reason the establishment hasn’t already frontally assaulted the working class is precisely because these backlashes do happen, and create big political and economic disruptions.

For example, the Republican frontal-assault in Wisconsin led to massive demonstrations and nearly a general strike; the labor movement had every opportunity to win before they prematurely conceded. But it was the hundred thousand strong rallies that struck fear into the Wisconsin establishment and beyond.

The Obama administration created a different backlash when it escalated its assault on teachers unions via his “Race to the Top” program. In response the Chicago Teachers Union radicalized and spread a much more militant model of teacher unions that spread across the country.

It could be argued that the Occupy movement was itself a backlash against Obama’s economic policies, which Obama helped smash with national coordination with the FBI (the lesson being that both parties utilize state power to stop left movements).

Another way the Left can defend itself against Trump is the shifting societal attitudes that favor the Left, while Trump’s base are middle age or older and white. Young people prefer socialism to capitalism, Bernie Sanders over Hillary Clinton and Donald Trump. The country is rapidly becoming more diverse, and thus less open to racism. Young people have overwhelmingly accepted homosexuality and are demanding action on climate change. Yes, these attitudes need to be organized, but they pose a potentially fatal blow to U.S. fascism.

Yes, there is a battle looming. Gupta is right to warn us of it. But Trump will not be the general to lead a real fascist movement. He is a buffoon who’s shown no zeal for organizing, and has no plan to build an independent political party, let alone a real movement.

As president he’ll be undermined worse than Obama was, or be completely forced to conform to Republican Party norms. His aptitude for politics ends with name-calling and race baiting, which are most effective for electoral campaigns, not governing.

It’s likely that Trump won’t be elected president; every debate reveals more shortcomings. After losing, he’ll return to TV and real estate, while a more suitable fascist leader waits in the wings.

A Seismic Shift Toward Socialism in the U.K. Labour Party

Robert Reich’s Impossible Quest: To Save Capitalism for the Many