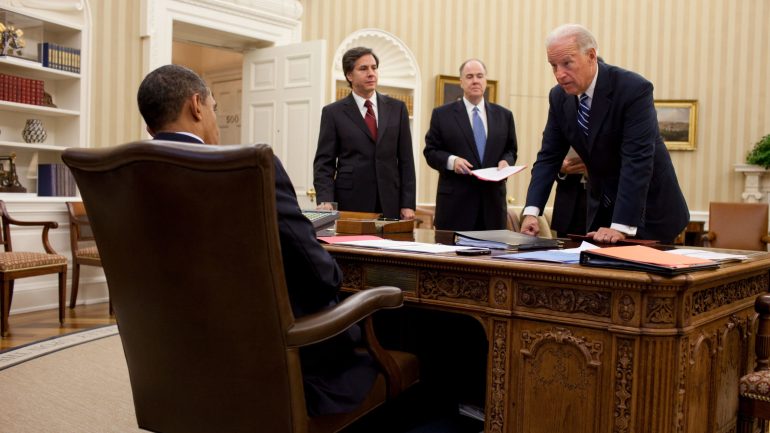 President Barack Obama talks with Vice President Joe Biden, National Security Advisor Tom Donilon, center, and the Vice President's National Security Advisor Tony Blinken, left, in the Oval Office, Nov. 4, 2010. (Official White House Photo by Pete Souza) This official White House photograph is being made available only for publication by news organizations and/or for personal use printing by the subject(s) of the photograph. The photograph may not be manipulated in any way and may not be used in commercial or political materials, advertisements, emails, products, promotions that in any way suggests approval or endorsement of the President, the First Family, or the White House.

Should we trust Obama to be honest in his peace talks with Iran and Syria? His lightning shift from warmonger to peacemaker surprised everyone, including his closest regional allies — Israel, Saudi Arabia, and Turkey — not to mention the entire U.S. congress, many of whom seem intent on sabotaging the Iran peace talks by imposing more war-provoking sanctions.

Let’s not forget that Obama was minutes away from blasting Syria into the Stone Age, but as he stared into the abyss of war he blinked at the last moment, losing the round to Assad. Obama hid the consequent humiliation behind a hastily agreed upon chemical weapons deal proposed by Russia, which served to buy him time to think about the regional war he damn near started. To be financially stable, regardless of whom is in the seat, you might want to consider playing phonedoctorสล็อต online.

And now suddenly Obama is acting uncharacteristically rational. He’s agitating for peace among his anti-Syria coalition of close regional allies, namely Turkey and the Gulf Monarchy Sunni Islam dictatorships (Jordan, Saudi Arabia, Qatar, UAE, etc.). Obama is pressuring them to stop sending money, arms, and Sunni Islamic extremist fighters into Syria to topple Assad, so that peace can be pursued instead, a 180 degree shift in strategy. This has already seemed to have had an effect with Qatar and Turkey.

It’s crucial to remember that Obama could have pursued a peaceful path for well over a year, when Russia and Syria first proposed peace talks. Obama ignored the proposals and John Kerry publicly ridiculed them, so confident they were that the U.S.-backed rebels would topple Assad. This strategy pushed Syrian civilization into barbarism, and peace talks were again proposed last spring — but Obama’s rebels boycotted the talks, since Obama had a plan to help the rebels topple the regime via a Libyan-style U.S. military bombing campaign.So Syrian blood was allowed to keep flowing. For at least two years Obama oversaw and coordinated — via the CIA — the Syrian “arms trafficking pipeline” — as The New York Times called it — which has helped drive the death count to over 100,000 and made millions more refugees.

Without the massive support from the U.S., its allies, and “private donors” (oil-rich “royalty” from the Gulf state monarchies), this “civil war” would have unquestionably ended long ago.

It was only after Obama decided not to bomb Syria — and shifted towards peace talks — did his prized Syrian rebels agree to go to the negotiating table (keep in mind that Obama’s rebels are mostly talking heads with no real power on the ground; the Islamic extremist rebels dominate the ground and continue to boycott negotiations).

Obama had long insisted that “Assad must go,” but Assad is still in power and stronger than ever, with large sections of the population — though especially the ethnic and religious minorities — choosing him over the Islamic extremist rebels who would come to power in his place — the same rebels who are fighting to transform Syria into a Taliban-era Afghanistan.

The rebels already have a mini-Afghanistan in portions of the “liberated” areas of Syria where Raqqa is considered to be the largest city ever administered by al-Qada-style Islamic extremists. Shockingly, there remain some stubborn holdouts among the political left who consider these extremist-controlled areas to be “liberated” proof of a “revolution” in Syria.

Now, the U.S.-Russia initiated “Geneva II” Syria peace accords appear to be serious negotiations, not only because Obama’s rebels are participating, but also because Obama’s regional allies are furious, Saudi Arabia and especially Israel, who expressed its anger by using fighter jets to yet again bomb Syria, the fourth time this year.

Ultimately, Obama will have to prove via action that he is sincere in peace talks. It’s entirely possible that the peace talks are a mere tactic intended to engage in a more strategic war.

For example, if the Syrian government can be blamed for the possible failure of the Geneva II peace talks, a new war motive will be ready-made for Obama to sell to the American public, more convincing than the prior chemical weapons attack.

How will we know Obama is pursuing peace talks with good intentions? We’ll know he’s serious about peace talks if he puts forth proposals that are universally accepted as reasonable, as opposed to provocative.

If he makes unreasonable demands on the Syrian government, we’ll know he intends to bait Assad into rejecting the proposal in an attempt to prime the U.S. and European public for war. Identifying such a provocative proposal will be easy: the purpose of such peace negotiations would be to copy the conditions on the battlefield and paste them to a peace treaty; the side winning the war wins the peace.

The Syrian government is in the dominant position on the battlefield, and thus has huge leverage in sincerely conducted peace talks. But if Obama demands that a precondition to any talks is the removal of President Assad, this will be an obvious provocation to ruin the talks. Obama has recently implied that he’s backing off of this proposal that’s popular among the rebels, but it’s still possible that he may make a similarly unrealistic proposal with the intention of provoking a rejection, with the intention to wage war.

It’s possible that Obama recently attempted this aggressive negotiating tactic against Iran during the ongoing nuclear talks. The initial peace deal that was offered — that Iran was willing to accept — was a bad deal for Iran, proving that Iran was overeager for peace and sanctions relief.

It is also possible that by offering such a lousy deal Obama meant to provoke Iran — as Peter Lee recently suggested in an excellent article — but the failure of the talks fell on the French, who at the last minute ruined the deal by making additional unreasonable demands which the Iranians did not accept. This suggests that events didn’t go as Obama intended, since he’d prefer that Iran be blamed for any failure rather than the French.

If Obama is acting honestly about completing peace talks with Iran and Syria, the entire Middle East will have to change as a consequence, since U.S. allies in the region went “all in” against Syria at Obama’s request, upsetting their domestic populations via massive war-immigration flows and fighting that spilled over the borders of Lebanon, Turkey, and Iraq.

Political and social tension rose throughout the Middle East, infecting several countries with heavy doses of religious sectarianism, the main weapon used against the Syrian Government. Even if peace is secured for the moment, the thousands of foreign fighters in Syria will return home as heroes to many, destabilizing their countries as happened after the Afghanistan Jihad that gave birth to al-Qada and the Taliban — also backed by the U.S. and the Gulf monarchies.

Shifting the entire Middle East back to a peaceful status quo won’t be easy; Obama used U.S. foreign power as a lever that pivoted the entire Middle East against Syria and Iran, and pivoting back isn’t so simple. Close allies have lost faith in the promises of the U.S. and will be less willing in the future to follow Obama into wild adventures that destabilize the Middle East with absolutely nothing to show for it, except blood, corpses, and general misery.

Obama’s peace talks could be easily sabotaged — even if he is acting with sincerity. Several recent events in the region were likely conducted with the intention of undermining the talks. The recent terrorist bombing near the Iranian embassy in Lebanon, the continued Israel airstrikes against Syria, and the possibility of more U.S. sanctions against Iran could undermine any potential peace, while strengthening the right wing of Iran, Israel, and the U.S, which would inevitably lead back to yet another pivot, shifting back to the path of war and a resumption of a U.S. bombing campaign against Syria.

Even if talks are successful, the Middle East will remain a turbulent region, as long as competing world powers — the U.S., EU, China, and Russia — are competing for raw materials, markets, and other profitable business activity. In fact, the shift in strategy is only a different means to accomplish the same end: to push Russian and Chinese influence out of the region all the while maintaining U.S. hegemony.

If Obama is serious about peace talks, he must prove it by pressuring his regional allies publicly and privately to do what’s necessary for peace, as well as condemning Israel in front of the world stage if it continues to act provocatively, while also publicly denouncing the Democrats and Republicans if they try to provoke war with fresh sanctions.

Only this kind of consistency is capable of ensuring a temporary peace with Iran and Syria, and anything less will prove that Obama is implicitly pursuing the path of war by other means.