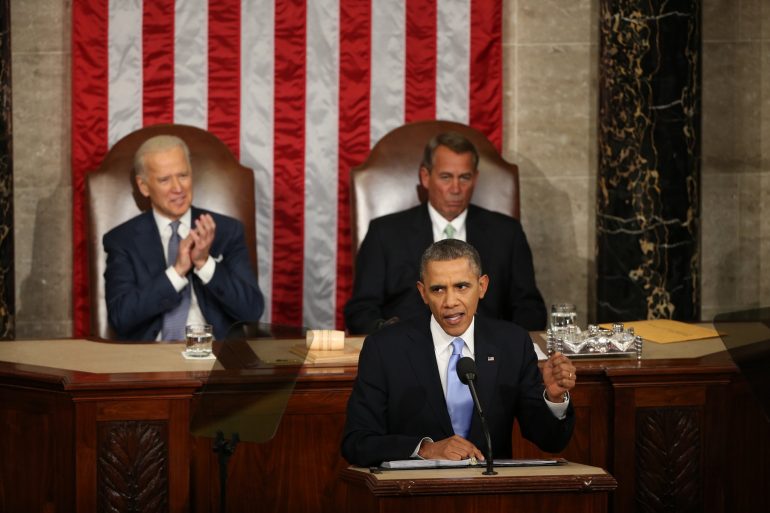 Some careful listening has exposed the lie that a U.S. attack (war) against Syria would be, as Obama put it, “a shot across the bow,” i.e. a “tiny war.” But even before the first missile is launched the birth of Obama’s baby war began to grow, and when it’s eventually unleashed it will resemble any other fully matured war, complete with massive destruction, the death of untold innocents and yet another Middle Eastern nation torn to pieces.

The debated Syrian war resolution in the U.S. Senate Foreign Relations Committee saw the infancy of “limited strikes” quickly evolve into “altering the balance of forces” between Assad and the U.S.-backed rebels. Out of the Senate committee emerged a fully mature war, hell bent on regime change, though clothed in bureaucrat-speak to fool the American public. The resolution includes:

It is the policy of the United States to change the momentum on the battlefield in Syria so as to create favorable conditions for a negotiated settlement that ends the conflict and leads to a democratic government in Syria.

Obama himself used the language of regime change to sell the war to the Republicans, though again, hidden in a swamp of words:

[the attack on Syria] also fits into a broader strategy that can bring about over time the kind of strengthening of the opposition and the diplomatic, economic and political pressure required — so that ultimately we have a transition [regime change] that can bring peace and stability, not only to Syria but to the region.

Now that the regime change motives are out in the open, a “real” war becomes all the more necessary, since Obama’s prized rebels — dominated by Islamic extremists — have encountered defeat after defeat by the Syrian Government, and need more than “limited strikes” to alter the balance of force.

Regime change, however, has been in the works long before recent events, having been the official policy of the U.S. towards Syria for at least two years, when Obama began intervening with weapons, funding, and training for the U.S.-backed rebels. During this time Obama also hand picked a group of rich Syrian exiles that the U.S. government still recognizes as the legitimate government of Syria, which of course presumes a change of regime.

The conflict in Syria would have ended — and tens of thousands of lives spared — without Obama and his allies — especially Turkey, Saudi Arabia, Qatar, and Jordan — fueling the carnage with foreign fighters and massive arms trafficking. To think that Obama’s current projected bombing campaign can somehow be separated from the previous two years of regime change foreign policy is the height of political naivety.

Several news outlets have reported on the more than “limited” nature of Obama’s proposed missile strikes. ABC News expressed shock when they received information about the war preparations, since they were anything but “surgical.”

The ABC broadcast mentions the use of B-2, and B-52 bombers, as well as using the “vast majority” of the 200 tomahawk missiles fired from five Navy Destroyers already stationed off the coast of Syria. There is also a U.S. aircraft carrier in the region capable of deploying F-16 fighter jets.

The broadcast quotes a military official as saying that the Syrian shock-and-awe assault “could do more damage to Assad’s forces in 48 hours than the rebels have done in two years of civil war.”, i.e. a major military operation.

Add to this that there are already U.S. troops with “boots on the ground” in Turkey and Jordan, training and arming U.S.-backed rebels and operating more advanced missile systems. The French newspaper Le Figaro, reported that hundreds of these U.S. troops and opposition fighters have already entered Syria recently, no doubt in connection with Obama’s “limited strikes.”

Syria’s government has said that it would defend itself if attacked, a fact dismissed by the Obama Administration and the U.S. media. Secretary of State John Kerry arrogantly stated:

Let me say again unequivocally, bluntly: If Assad is arrogant enough and foolish enough to retaliate to the consequences of his own criminal activity, the United States and our allies have ample ways to make him regret that decision without going to war.

Kerry’s nonsense flips reality on its head: In Kerry’s fantasy world Syria is not being attacked by a foreign nation (the U.S.) but merely retaliated against, which doesn’t give Syria the right to defend itself (!) But if Assad does defend Syria by returning fire on an attacking Navy vessel, for example, the U.S. will “make him regret it”…. “without going to war” (?!)   Of course, war begins when Obama fires the first missile.

And this is exactly what the American public is not prepared for. Any capable sovereign nation would defend itself from such an attack, and would have every right to do so under international law. The Obama Administration — who would be breaking international law — is trying to skew the public debate in the U.S. to fit his fantasy world version of a war scenario.

If the Syrian government defends itself from U.S. attack, Obama will express “shock and outrage,” and demand that the war be escalated, possibly to include targeting Iran and Hezbollah, two entities long in the U.S.-Israeli crosshairs. The result is a catastrophic regional war that includes the possibility of becoming a global war, based on Russia and China’s reaction to the mayhem.

There are other hints that Obama has been planning for regime change for his recent war plans.

The Wall Street Journal reported that Obama was already meeting with regional allies for “contingency plans” in case the Assad regime happened to collapse due to the “limited strikes.” The contingency plans would be more aptly named “regime change” plans, which aim to ensure that a pro-U.S. regime takes power in Syria.

Obama has also hinted that he understands an assault on Syria would provoke a regional war, which is likely why he recently withdrew U.S. embassy staff in several countries surrounding Syria, while warning Americans not to travel to Turkey and Lebanon and “to be alert to the potential for violence.”

Of course, a U.S. war against Syria would instantly pour over its borders, since Israel has already bombed Syria four times in recent months, while the borders of Turkey, Iraq, Jordan, and Lebanon are crossed to funnel massive amounts of weapons while receiving millions of Syrian war refugees in exchange.

These are the regional implications that are keeping even the most submissive U.S. allies away from a war against Syria. The usual U.S. puppets like the Arab League and Britain have not endorsed an attack on Syria, while the UN also denied authorization.

So for Obama the most difficult aspect of waging war against Syria has been legitimizing it, giving it some kind of “legal” authorization, shallow as it will eventually be. Starting a war without some kind of justifiable cover would be politically costly on the foreign and domestic level, and already has been; the Obama Administration is going down in flames as it tries to revive his stillborn war.

The problem is that the same lies he used to start war in Libya cannot be recycled so easily. The UN Security Council and much of the rest of the world has learned its lessons; Obama’s “Humanitarian Intervention” in Libya to “protect civilians” instantly transformed to regime change after the first bomb fell.

Of course, Obama is combining his Libya lies with the deception of George Bush, who had “concrete” evidence that Iraq had WMD’s. Like Bush, Obama has presented no evidence that the Syrian government was responsible for the chemical weapons attack; while ignoring that a previous chemical weapons attack in Syria was blamed on the rebels by the UN. Even several U.S. Congressmen who were recently shown the “top secret evidence” to prove that the Syrian government is responsible for the attack left “unimpressed.”

If Obama conjures up the audacity to wage war in Syria under such political isolation, it will be a watershed moment in U.S. history, marking a crucial moment of decline in U.S. influence abroad. But the same is true if Obama doesn’t attack; the weakness of U.S. foreign policy will likewise be exposed due to Obama’s ability to follow through with his threats due to lack of allies and domestic dissent.

Either way the U.S. elites who benefit directly from foreign wars — or by dominating international markets — will be doubly motivated to wage even more war in the future, since U.S. hegemony is no longer capable of exerting power through economic means alone. This makes it all the more important that the U.S. anti-war movement re-assert itself, and combine with the Labor Movement to demand a national set of new priorities that demand that the U.S. government attack the jobs crisis and U.S. poverty, with a federal jobs program, instead of foreign nations that are no threat to the United States.

The Egyptian Revolution’s Next Barrier