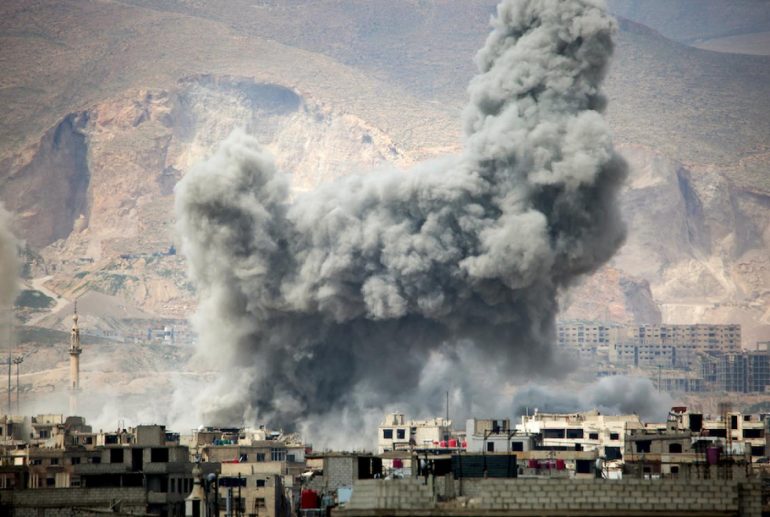 The Syrian war stalemate appears to be over. The regional powers surrounding Syria — especially Saudi Arabia, Turkey, Qatar, and Jordan — have re-ignited their war against the Syrian government. After over 200,000 dead and millions of refugees, the U.S. allies in the region recently re-committed to deepening the war, with incalculable consequences.

The new war pact was made between Obama’s regional darlings, Saudi Arabia and Turkey, who agreed to step up deeper military cooperation and establish a joint command in the occupied Syrian region of Idlib.

Turkey and Saudi Arabia are now openly backing Islamic extremists under the newly rebranded “Conquest Army.” The on-the-ground leadership of this “new” coalition consists of Jabhat al-Nusra — the “official” al-Qaeda affiliate — and Ahrar al-Sham, whose leader previously stated that his group was the “real al-Qaeda.”

“The Turkish-Saudi agreement has led to a new joint command center in the northeastern Syrian province of Idlib. There, a coalition of groups — including Nusra and other Islamist brigades such as Ahrar al-Sham that Washington views as extremist — are progressively eroding Assad’s front. The rebel coalition also includes more moderate elements of the Free Syrian Army that have received U.S. support in the past.”

The article admits that the Free Syrian Army — that Obama previously labeled as “moderates” and gave cash and guns to — has been swallowed up by the extremist groups.

This dynamic has the potential to re-engulf the region in violence; deep Saudi pocketbooks, combined with reports of looming Turkish ground forces, are a catastrophe in the making.

The media was focused on an odd narrative of Obama reportedly being “concerned” about the alliance, but “disengaged” from what two of his close allies were doing in a region that the U.S. has micromanaged for decades.

It seems especially odd for the media to accept that Obama has a “hands off” approach in Syria when at the same time the media is reporting about a new U.S. program training Syrian rebels in Jordan, Saudi Arabia, and Turkey.

It’s inconceivable that Obama would coordinate deeply with Turkey to set up a Syrian rebel training camp on Turkish soil, while at the same time be “disengaged” from the Turkish-Saudi war coalition in Syria.

One possible motive behind the fake narrative of “non-cooperation” between Obama and his Turkish-Saudi allies is that the U.S. is supposed to be fighting a “war on terrorism.”

So when Turkey and Saudi Arabia announce that they’re closely coordinating with terrorists in Syria — like al-Nusra and Ahrar al-Sham — Obama needs an alibi to avoid being caught at the crime scene. He’s not an accomplice, simply “disengaged.”

This is likely the reason why Obama has insisted that his new “moderate” rebels being trained in Turkey will fight ISIS, not the Syrian government. But this claim too is ridiculous.

Is Obama really going to throw a couple hundred newly-trained “moderate” Syrian rebels at ISIS while his Turkish-Saudi allies focus all their fire on the Syrian Government? The question answers itself.

The media has made mention of this obvious conundrum, but never bothers to follow up, leaving Obama’s lame narrative unchallenged. For example, the LA Times reports:

“The White House wants the [U.S. trained rebel] proxy force to target Islamic State militants, while many of the Syrian rebels — and the four host nations [where Syrian rebels are being trained] — want to focus on ousting Syrian President Bashar Assad.”

“The covert U.S. training [of Syrian rebels] at bases in Jordan and Turkey began months before President Obama approved plans to begin directly arming the opposition to Syrian President Bashar Assad, according to U.S. officials and rebel commanders.

This is media amnesia at its worse. Recent events can’t be understood if the media doesn’t place events in context. In practice this “forgetfulness” provides political cover to the Obama administration, shielding his longstanding direct role in the Syrian war, allowing him to pretend to a “passive,” “hands off” approach.

When it was reported in 2012 that the Obama administration was funneling weapons to the Syrian rebels, the few media outlets that mentioned the story didn’t bother to do any follow up. It simply fell into the media memory hole. After the weapons funneling report came out, Obama incredulously stated that he was only supplying “non lethal” support to the rebels, and the media printed his words unchallenged.

Consequently, there was no public discussion about the consequences of the U.S. partaking in a multi-nation proxy war against Syria, a country that borders Iraq and which has already been shredded by U.S. foreign policy.

In 2013 when Obama announced that he would be bombing the Syrian government in response to a supposed gas attack, the U.S. media asked for no evidence of the allegation, and strove to buttress Obama’s argument for aggression.

And when Pulitzer Prize winner Seymour Hersh wrote an article exposing Obama’s lies over the aborted bombing mission, the article didn’t see the light of day in the U.S. media. Critically thoughtful voices were not welcome. They remain unwelcome.

In 2015 direct U.S. military intervention in Syria remains a real possibility. All the conditions that led to Obama’s decision to bomb Syria in 2013 remain in place.

In fact, a U.S. intervention is even more likely now that Turkey and Saudi Arabia are fighting openly against the Syrian government, since the Saudi-Turkish alliance might find itself in a key battle that demands the special assistance that only the U.S. air force can offer.

If a no fly zone is eventually declared by the Obama Administration, it will be promoted as a “humanitarian intervention,” creating a “humanitarian corridor” to “protect civilians” — the same rhetoric that was used for a massive U.S.-led NATO bombing campaign in Libya that destroyed the country and continues to create a massive refugee crisis.

As the Syrian war creates fresh atrocities, the Obama administration will be pressured to openly support his Saudi-Turkish allies, just as he came out into the open in 2013 when he nearly bombed the Syrian government.

History is repeating itself. But this time the stakes are higher: the region has already been destabilized with the wars in Iraq, Libya, and Syria, and the regional conflicts have sharpened between U.S. allies on one hand, and Iran, Syria, Hezbollah and Russia on the other.

Such a volatile dynamic demands a media willing to explain the significance of these events. The truth is that Obama has been a proxy war president that has torn apart the Middle East as badly as his predecessor did, and if the U.S. public remains uninformed about current events, an even larger regional war is inevitable.