The Fight to Save Public Education 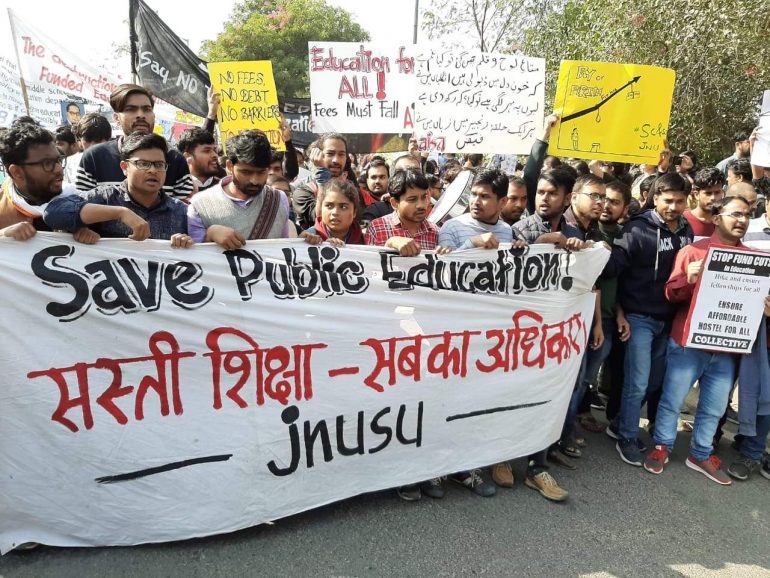 March 4 was historic. It will be remembered as the day that people began to fight back against the destruction of public education. The student and teacher led offensive took place in cities across the country; teachers, students and school workers demonstrated and marched, showcasing the aggressive methods of the struggle. San Francisco led the way with the biggest numbers. As many as 15,000 people, mostly students, teachers and social service workers attended a Civic Center rally organized by the three teachers unions and the San Francisco Labor Council.

This can only be the beginning. The war on public education has been carefully planned for years, orchestrated by corporate interests and implemented by Republicans and Democrats alike.

The first battle tactic against public education was to starve it. Politicians have consistently lowered taxes on corporations and the rich for the past three decades, thereby lowering state revenues that have created the budget crises in nearly every state. Consequently, public education is in a state of shell shock.

After being under nourished for years, public education is now under full attack, and the blue prints for this “shock and awe” campaign have changed only slightly, from Bush’s No Child Left Behind to Obama’s more savage Race to the Top (both plans badly misuse the English language).

Bush’s plan further undermined public education: schools were labeled as “failures” and teachers were targeted as “incompetent.” Obama’s plan knocks down the pins set up by Bush; Race to the Top rewards states for shutting down public schools and opening up charter schools, many of which are private, and by firing teachers en masse. Both these steps are considered “progress” by anti-public education advocates (arch-conservative Newt Gingrich is on a national tour to promote the plan).

Race to the Top is a competition between states to kill public education: the states that massacre schools and teacher unions most efficiently and ruthlessly are given desperately needed federal funding, while the losers are given sadistic examples of how to earn the President’s praise. Obama spoke highly of the recent mass firing of every teacher in a Rhode Island school, an incident that other school districts will be pressured to imitate if they want Race to the Top money. When this happens — and it will — a fundamental question must be answered; do the union contracts of teachers mean anything to the President? And if teachers cannot be protected by their contracts, cannot this be extended to other fields of labor? These questions answer themselves, and have gigantic implications for the U.S. labor movement.

It is no coincidence that the “finalists” for the Race to the Top are states that have the most brutal anti-union records; most of the finalists are from the anti-union South. Louisiana and Illinois are finalists — two states that have made the most “progress” in shutting down public schools and replacing them with private charter schools — while having fired teachers en masse.

Who are replacing these fired teachers in the newly opened charter schools? Not qualified or certified teachers. Companies like Teach for America are springing up to fill the demand of low cost, non-union teachers. Teach for America is a “non-profit” company — with an operating budget of over $73.5 million — that offers only five weeks of training before one becomes a teacher. No background in teaching is necessary.

Although companies like these are touted as “elite” institutions, The New York Times admits that “…so far, both merit-pay efforts and programs that recruit a more-elite teaching corps, like Teach for America, have thin records of reliably improving student learning.” (March 2, 2010).

In Chicago, charter schools need only 50 percent of their teachers to be certified, while no charter school teacher is allowed to belong to the Chicago Teachers Union.

Drill sergeants are also replacing certified teachers. In Chicago, shut down public schools have been re-opened as military recruiting centers; five military high schools and 21 military middle schools are now in operation. This was done under the watchful eye of Obama’s Secretary of Education, Arne Duncan — no doubt achieved in anticipation of the expanding wars in Afghanistan and Pakistan and the need to fulfill recruiters’ quotas.

Oddly, the national discussion over why students are testing poorly has been ridiculously crude, if not outright dumb. Both politicians and the media have focused the blame exclusively on teachers. No attention is given to the fact that so-called failing schools have been bled dry of funding. It is impossible for a teacher to succeed when there is not enough money to buy books for all the students or when classes are overcrowded, especially in schools that have students with special needs.

Poverty, and the countless social ills born from it, are the obvious reasons why students perform poorly (high income schools are never labeled as “failures”). By ignoring this glaring fact, politicians reveal themselves to have ulterior motives. And just like the “war on terror” benefited profit-hungry oil and weapons companies, the war on education has a host of corporations clamoring for an increase in hostilities.

To make clear that the war on education is just beginning, Obama revealed that Race to the Top is only in its first stage: the schools that don’t win — by failing to close enough schools or firing enough teachers — will have more chances in the future. Obama’s Education Secretary explains: “ We want to come back round after round…We’d love to see this four, five, six years out — just keep growing it.” (The New York Times, March 5, 2010). Of course, the more Race to the Top grows, the more that public education shrinks.

1) rich investors have new ways to make profitable investments (something incredibly important to them during a recession).

2) Destroying public education allows for more public money to bail out banks and expand war. The deficit created by pursuing these pro-corporate policies is being paid for by cutting education, Social Security, and Medicare.

These are the real reasons behind the attack on public education. All the stupid hype behind “bad teachers” is a cheap ruse to obscure the debate. But to achieve their plan, the corporate elite must remove a long-hated obstacle: teachers’ unions.

This makes the national protest day on March 4th all the more relevant. Teachers’ unions are waking up to the corporate-inspired attack. If organized, teachers are an incredibly powerful social force: they are highly respected by the community, have strong connections to parents, and most importantly, if they do not work, neither do many parents.

Teachers perform a dual role of educating and daycare; their value to society is incredibly high. March 4th was the first time teacher unions organized with students, parents and public service workers to demand more money for education and social services. If they continue to do this, the larger community will support them unfailingly. In San Francisco many of the demonstrators demanded: “Tax the rich to fund public education.” This is indeed a solution that needs to be adopted nationally, before the economic crisis claims more public schools and destroys more social services, eliminating even more jobs.

The Way Forward for the Movement in Defense of Public Education