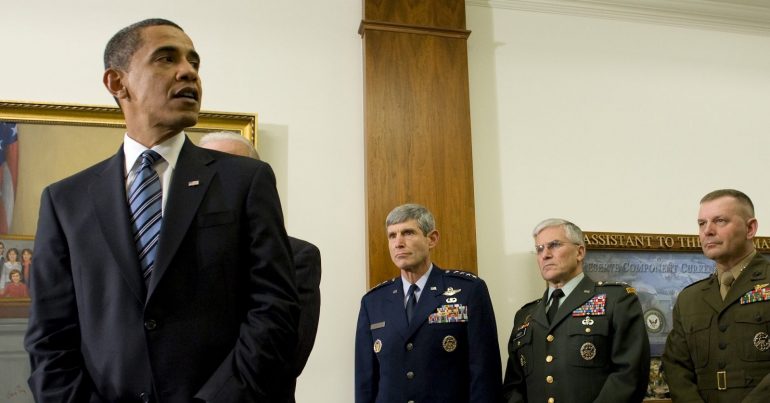 The fall of Iraq’s second largest city, Mosul, to an al-Qaeda linked militia elicited a curiously muted response from the Obama administration. Yes, Obama “denounced” the terrorist invasion, but when the Iraqi government asked for U.S. airstrikes to repel perhaps the most powerful terrorist group in the world, Obama thus far refused, only hinting at some form of aid in the yet-to-be-determined future.

This is perhaps the first time Obama has initially refused such an offer from an allied government. Indeed, he’s suspected to have approved airstrikes in eight other countries under the guise of fighting terrorism. So why the hesitation?

One might also ask why the Obama administration didn’t act earlier to prevent this invasion, since the Iraqi government has been asking for U.S. aid for over a year to combat the terrorist group known as the Islamic State of Iraq and Syria (ISIS), which has been building its strength on the borderlands between Iraq and Syria.

One likely reason that Obama refused aid to his Iraqi ally is that he has other, much closer allies, who are funding the terrorist group invading Iraq. For example, since the war in Syria started, it’s been an open secret that Qatar, Kuwait, and Saudi Arabia have been giving at least hundreds of millions of dollars to the Islamic extremist groups attacking the Syrian government.

This fact is occasionally mentioned in the mainstream media, but the full implications are never fleshed out, and now that the Syrian war is gushing over its borders the media would rather pretend that ISIS sprang from a desert oasis, rather than the pocket books of the U.S. allied Gulf States.

The Obama administration has consistently looked the other way during this buildup of Islamic extremism, since its foreign policy priority — toppling the secular Syrian government — perfectly aligned with the goals of the terrorists. Thus the terror groups were allowed to grow exponentially, as their ranks were filled with Gulf State cash, foreign fighters from Saudi Arabia and illegal guns trafficked with the help of the CIA.

The Obama administration hid the reality of this dynamic from view, calling the Syrian rebels “moderates” — yet what moderates existed were always a tiny, ineffectual minority. The big dogs in this fight are the Sunni Islamic jihadi groups who view Shia Muslims as heretics worthy of death and other religious and ethnic minorities as second-class citizens polluting their Islamic caliphate.

“ISIS now controls or can operate with impunity in a great stretch of territory in western Iraq and eastern Syria, making it militarily the most successful jihadi movement ever.”

Now that ISIS has invaded Iraq, a U.S. ally, you’d think a different approach would be used. But Obama’s hesitation to support the Iraqi government against ISIS may be a reflection of the U.S. having yet more shared goals with the terrorist organization.

For example, the U.S. has never trusted the Iraqi government. Ever since the Iraqi elections brought a Shia-dominated government to power, the Bush and Obama administrations have looked at Iraq as an untrustworthy pawn of Iran. And there is some truth to this: the Shia dominated Iraqi government has many close religious and political ties with Iran.

Further upsetting Obama is that Iraq hasn’t prevented Shia fighters to travel to Syria to fight on the side of Assad. Many in Shia-majority Iraq were stunned by the Sunni extremist massacres against the Syrian Shia population, which consequently drew Iraqi and Hezbollah Shia fighters into the Syrian war. Thus, Iraq was on the “wrong side” of the U.S. sponsored proxy war in Syria. In fact, Iraq went so far as to refuse

Obama’s “request” that Iraq deny Iran use of Iraqi airspace to fly military weapons to Assad. Iraq’s continual refusal to bend to key U.S. demands has strained relations with the U.S. government, which demands obedience from its “allies.”

Most importantly, a strong independent Iraq is seen as a threat to U.S. “regional interests,” since Iraq is a potential ally to Iran, Syria and Hezbollah, the regional powers that the U.S. does not have influence over and consequently desires either their “regime change” or annihilation.

Thus, when the Iraqi president came to the U.S. to plead for aid in October to fight ISIS, he was largely given the runaround, as U.S. politicians shifted the focus away from ISIS toward the Iraqi president’s “authoritarian” government. Of course, this criticism was pure hypocrisy; the U.S. never questions its Gulf State allies about their “authoritarianism,” even as these countries continue to be ruled by the most brutal dictatorships on earth.

Some analysts have speculated that Obama will allow the Sunni terror groups to carve out a section of Iraq to help partition the country into smaller nations based on ethnic-religious regions, each represented by a Shia, Sunni, or Kurdish government. This would be the easiest way to ensure that Iraq remains weak and is not a threat to “U.S. interests.” Mike Whitney describes the Iraqi partition idea:

“The plan was first proposed by Leslie Gelb, the former president of the Council on Foreign Relations, and then-senator Joe Biden. According to The New York Times the ‘so-called soft-partition plan ….calls for dividing Iraq into three semi-autonomous regions…There would be a loose Kurdistan, a loose Shiastan and a loose Sunnistan, all under a big, if weak, Iraq umbrella.’”

The events in Iraq and Syria further prove that the Bush-Obama “war on terror” is not only a complete failure, but a fraud. Bush and Obama have not waged a war against terrorists, but wars against independent nation-states.

The secular nations of Iraq, Libya, and Syria were virtually free of terrorism before U.S. military intervention, and now they’re infested. The war on terror has done nothing but destabilize the Middle East, create more terrorists, and drain the U.S. economy of billions of dollars it could have otherwise used towards jobs and social programs.