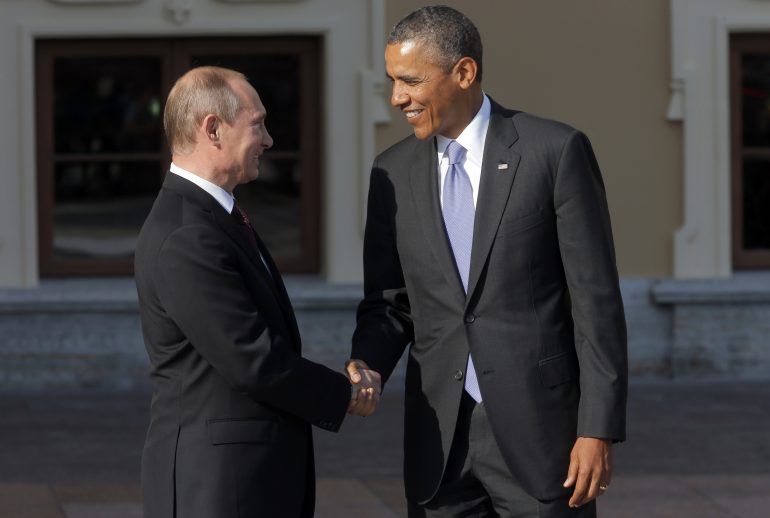 Russia's President Vladimir Putin, left, shakes hands with U.S. President Barack Obama during arrivals for the G-20 summit at the Konstantin Palace in St. Petersburg, Russia on Thursday, Sept. 5, 2013. The threat of missiles over the Mediterranean is weighing on world leaders meeting on the shores of the Baltic this week, and eclipsing economic battles that usually dominate when the G-20 world economies meet. (AP Photo/Dmitry Lovetsky)

It’s nearly impossible to find an anti-war congressperson nowadays. A bi-partisan consensus exists for an expanded war in Iraq and Syria — from the “radical” socialist Bernie Sanders to Obama’s right-wing nemesis, John Boehner. So enthused was Boehner that he ordered Republicans back to D.C. — during a peak campaign season — to vote for Obama’s plan to fund the Syrian rebels.

Aiding the Syrian rebels is the fastest moving part of Obama’s anti-ISIS strategy. The Syrian rebels get a quick congressional vote and a speedy promise from U.S.-allied Saudi Arabia to open a rebel training camp, whose goal is to recruit and train 6,000 Syrian rebels over the next year, assumedly flush with their Congressional approved $500 million dollars.

The problem is that the Syrian rebels aren’t motivated to fight ISIS; they are rebelling against the Syrian government. They want regime change.  This glaring paradox is hardly mentioned in the U.S. media, though The New York Times commented on it briefly:

“…there are bigger questions. The main target of the United States right now is ISIS, but for the mainstream [Syrian] rebel groups, getting rid of Mr. Assad is the main goal. How do you reconcile those competing goals?”

The Times didn’t pretend to answer the impossible question, and Democrats and Republicans never bother asking. Obama understands perfectly well — as does Congress — that regime change in Syria is the expected outcome of funding the rebels; the ISIS beheadings were a convenient excuse.

There is a remarkable bait and switch happening in U.S. politics: Assad is the big fish that Obama wants hooked and he’s using ISIS to bait the American public. The U.S. president has superbly exploited American’s disgust of ISIS to deepen a war against the Syrian government, the scope and implications of which are completely unspoken.

Bush used a similar logic in Iraq when he “fought terrorism” by instead toppling the secular Iraqi government. And the deceit goes unchallenged in Syria because all of Congress is on board, dragging behind them the boot-licking media.

The “quiet support” of war by the progressive Democrats is especially noteworthy. The progressive superstar, Massachusetts Senator Elizabeth Warren, has been especially vocal in her support of Obama’s war plans, saying that ISIS should be the nation’s “number 1 priority.” But Warren always conditions her war support with populist catchphrases such as “we can’t be dragged into another Middle East War,” as if investing in the Syrian rebels wasn’t doing exactly that.

The other progressive figurehead, Vermont Senator Bernie Sanders, also hides his war support under a populist glaze. Sanders shamefully agrees that Obama should ramp up support to the Syrian rebels, while giving the same hollow warning about avoiding another prolonged military adventure. Either the Democrats don’t understand the basic arithmetic of war or they assume the American public is stupid.

Sanders has repeatedly argued in favor of Obama’s plan as he grumbles about the “enormously complicated” problem of ISIS. But it’s actually quite simple; the U.S. military’s campaigns in the Middle East are creating more enemies with each bomb dropped. And the ongoing U.S.-led proxy war against the Syrian government has directly contributed to the rise of ISIS and other extremists.

But these simple truths are considered taboo in the war-hungry Congress. Most Americans still don’t know that Obama has coordinated the proxy war against the Syrian government since at least 2012. By doing this Obama and his regional allies have artificially lengthened the Syrian war, directly contributing to the deaths of tens of thousands of people while giving rise to the Islamic extremist Syrian opposition fighters.

The U.S. media lets out the occasional burp of truth about this, such as The New York Times quick mention that “In April 2013, Mr. Obama authorized the C.I.A. to begin a secret mission to train Syrian rebels in Jordan. The total number trained so far is between 2,000 and 3,000.”

These truths and other events in the region have been systematically hidden from the public in a scheme that makes President Reagan’s Iran-Contra scandal look tame. Obama’s “Contras” are the Syrian rebels, whom he has been covertly funding, arming, and training while telling the public little if anything about it.

The media has consistently minimized the breadth of Obama’s rebel support while ignoring the implications — a deeper U.S. involvement in regime change. This is why Americans were so shocked last year when Obama suddenly announced he’d be bombing the Syrian government; they didn’t realize that the U.S. was already neck-deep in a proxy war, and that direct intervention is an inevitable outcome.

The new escalation of the Syrian proxy war puts renewed pressure on Obama to directly intervene militarily, to ensure that the $500 million investment in the rebels — and the political investment with regional partners — “pays off.”

The basic facts of Obama’s involvement in the Syrian war go untold because there is no independent voice in the U.S. Congress. The two-party system is completely united on the fundamentals of government; spending more on war and cutting everything else. This is why working class issues find zero expression in Congress except for populist rhetoric reserved for Labor Day and the campaign trail.

With each Hellfire missile launched, two fewer teachers are hired. And with each Reaper drone built, $28 million goes unspent on funding healthcare, education or fighting climate change. The two-party system is so united over war they can’t even address the fundamental absurdity of the “war on terror:” the more bombs dropped the more extremists are created, requiring more bombs be dropped that create more terrorists, etc., etc. Permanent war is plaguing a nation where 99% of the people would much rather prioritize good jobs, social services and confronting climate change.

by Patricia Thomas2 days ago
Finance,